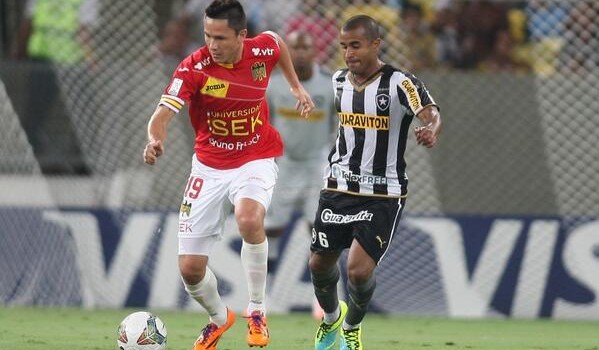 Unión Española will attempt to successfully fly the flag for Chile when they take on Arsenal de Sarandí in the Copa Libertadores tonight.
Buenos Aires – Universidad de Chile and O´Higgins failed to make it through the group stages, leaving Unión as Chile´s sole representatives in the last 16 of South America´s top club competition.
Unión came out on top in a difficult Group 2 that included Brazil´s Botafogo and Argentinian champions San Lorenzo de Almagro. However, their tally of nine points was the lowest of all the group winners and meant they had to take on the ´best´ runner-up in the last 16 – Arsenal.
Ironically, Arsenal came second in their group with a bigger points tally than Unión – 12. They won four of their six matches to finish runners-up to Mexico´s Santos Laguna, who have since been knocked out by Argentina’s Lanús.
While Unión lie only eighth in the Clausura, they´ve saved their best form for the Libertadores – and it´s been the same story for Arsenal. They´ve struggled in their domestic league and saved their best form for the cup.
Manager Gustavo Alfaro paid the price for Arsenal´s poor league form and has been replaced by ex-Boca Juniors striker Martín Palermo.
Unión will no doubt try to keep things tight in the first leg this evening to ensure they have a fighting chance in the second leg on home soil next Thursday.
Striker Gustavo Canales played for Arsenal before rejoining Unión and knows all about them.
The former Universidad de Chile forward said: “It´s a very difficult rival, but we´ve prepared for these games to win through to the quarter-finals and are very optimistic.”
Meanwhile, Unión playmaker Cristian Chávez is looking forward to coming up against the team managed by his old Boca team-mate Palermo.
He said: “I´ve always said that Martín is like a father to me, he´s taught me a lot. However, now I have to confront him and I want to beat him.”
The rojos will have to try to stop ex-Rangers striker Milton Caraglio doing damage. However, Unión won´t be able to call on the services of Chile international defender Marcos González to do that.
The centre-back, recently freed by Flamengo, hasn´t received FIFA authorisation to play in the last 16 tie, but could feature later in the tournament if Unión progress.