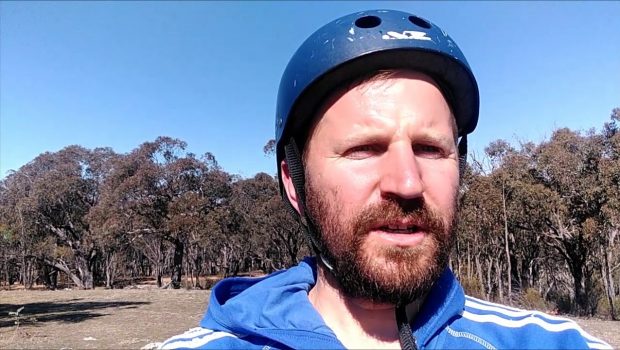 Capital Eyes Vlog 49 sees Daniel Boyle return to Gossan Hill as well as play some footbag in various places in the Belconnen District.

My last visit to Gossan Hill was captured in an earlier vlog, where I got caught in a downpour on the way down from Mt Painter. I experienced much better weather this time around. The reason why I considered going up there was a recent article from Tim The Yowie Man in the Canberra Times. It was about the big pile of rocks and it added something that I had wrong – the rocks are not at the summit of the hill, which is a bit odd.

The pile had grown larger since my last visit and a second pile had appeared as well. I was able to do a few footbag tricks there, then I had a longer session next to the Belconnen skatepark. I recently got some new Rod Laver shoes and am still adjusting to them, but this was one of the first sessions where it was coming together.

On the way back in I stopped at another place which is a bit like a DIY skatepark and I attempted a few footbag trials style tricks. This is something I’ve been interested in a long while but haven’t been able to capture too many tricks on video. There are not that many players who do that kind of style, mainly due to the high level of danger involved. Pete Bowler from the USA has been really pushing these kind of tricks lately.

All told I rode about 25 km on that day. I probably could have gone further but decided to put some more time into the footbag session and it paid of with a few tricks along the way. As mentioned in the vlog, the weather came out great after quite a cold start to the day.