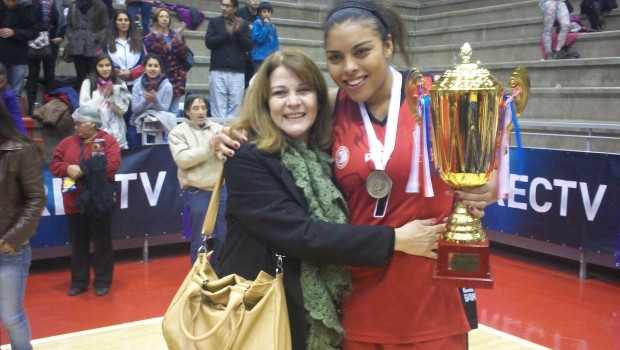 It´s just as well that Ziomara Morrison likes challenges because they keep coming thick and fast in her direction.
This year is proving to be even busier than usual for the 25-year-old, who has spent time in Europe, South America and North America.
After her club commitments in Turkey´s Ceyhan Belediyespor at the start of the year, Morrison dashed back to Chile for the South American Games in Santiago in March.
In an unforgettable tournament, the 6ft 4ins centre showed why she is rated the best player in South America with a series of outstanding performances.
In the final, she weighed in with 34 points, but Chile were edged out by arch-rivals Argentina in an epic overtime clash.
After that, Morrison headed to the WNBA´s Indiana Fever for pre-season training, but her hopes of playing for the second time in the United States were dashed when the club decided not to sign her.
Then Morrison played for Chile´s Universidad Austral in the South American Club Championships in Ecuador before returning to the Chilean League with Colegio Los Leones, who clinched the national title at the weekend.
Next up come the South American Championships in Ecuador in August before Morrison heads back to Turkey to play for Besiktas.
It would be enough to leave some players feeling dizzy, but Morrison has learned to take the travelling, as well as the highs and lows, in her considerable stride.
Asked about her Indiana setback, she admitted “I was really disappointed, but there were seven players going for one place, so it was really hard.
“There were some other players that were more physical than me and I think they were looking for that kind of player.”
Morrison played for the San Antonio Silvers Stars in the top league in the world in 2012 and is still hopeful of another crack at the WNBA, especially if she can perform well in the demanding Turkish competition.
She said: “I hope to play well in Besiktas to get the chance to go again. It´s the best competition for me right now and I decided to go back because of the level, so I can become a better player.”
Before she travels to Turkey in September, Morrison has the little matter of representing her country again. Back in March, Chile had the advantage of home support in the South American Games, but this time they travel to Ecuador.
“It will be harder, but we have more time to prepare,” she said. “For the South American Games here in Santiago, I arrived the same day. Now it will be different because we have one month to prepare and we can do better.”
Asked about the big rivals in the continental competition, Morrison names South American Games winners Argentina and Brazil, who didn´t compete in Santiago.
Morrison begins the preparations on a high after Colegio Los Leones beat New Crusaders to win the national title.
A first quarter knee injury forced her off court for a big chunk of the match, but she returned in the third quarter to help her team overcome the Valparaíso outfit.
She added: “It was really hard work, but we stuck together. I´m so happy and I´m really proud of my team.”