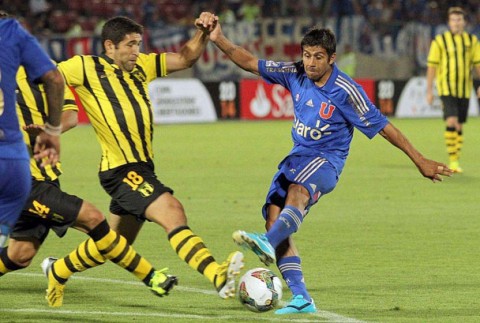 Azules on a high after gutsy Libertadores win at altitude

Peru – La U travelled to about 3,500 metres of altitude in Huancayo expecting a tough night against a team who had beaten Brazilians Cruzeiro in their first home game in the competition.

And that was the way it turned out as the azules, still smarting from a 5-1 loss against Cruzeiro in their last outing, had to come from behind to earn three precious away points.

Former Unión La Calera striker Victor Ferreira put the hosts in front in the 35th minute and it looked as though la U were in trouble.

However, the important thing was the response – and it wasn´t long in coming. Midfielder Ramón Fernández netted a brilliant free-kick four minutes later to once again show his class in South America´s leading club competition.

A point would have acceptable away from home, but the visitors went for all three and got their reward in the 76th minute. Another ex-O´Higgins man, Enzo Gutiérrez, headed home from a corner to notch the winner.

Even the sending off of late substitute Igor Lichnovsky, along with Garcilaso’s Ferreira, in stoppage time failed to take the shine of la U’s night.

The victory leaves them in a much stronger position in Group 5. Uruguay´s Defensor Sporting pulled off something of a surprise by beating Cruzeiro 2-0 at home in the other match. It means la U and Defensor top the group with six points apiece, while Real Garcilaso and Cruzeiro only have three.

La U entertain Garcilaso next week and will look to secure another three points that would put them in a very strong position in the group with two matches left.

Unión Española will be praying they can follow in the azules´ footsteps when they visit Argentina’s San Lorenzo de Almagro, the team supported by Pope Francisco, in the Copa Libertadores tonight.

Unión striker Carlos Salom said: “It´s a difficult game, knowing that we can go top if we win, but we´re going to go with conviction. We have to attack, be forceful and try to score goals.”