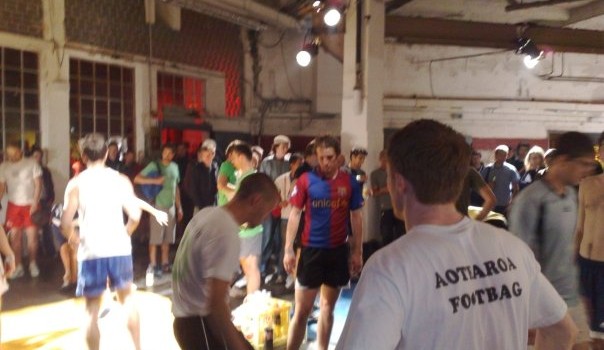 This new column will provide an overview of the happenings in the sport of footbag. It will be built to include further video coverage, continuing the Freestyle Footbag News broadcast.

Some of the sport’s biggest names were hard to miss during the week. While there was no video, as it was just a “muck around session”, Ethan “Red” Husted has posted that Jim Penske hit 9 unique “beast” tricks. With 6 being the number of the beast, the combination was apparently:

Along with Nick Landes, who won the Sport/Life Fearless Challenge in 2014, Penske has turned to the crowdfunding platform Tilt to raise money to attend the World Championships. With just over a month remaining, the pair have reached $1,530 of their $2,500 target. You can donate to the campaign here.

There are some interesting thoughts on the idea of crowdfunding for footbag on this thread at the Modified forum.

The campaign has been organised by Dexter Struz, who hopes the appearance of some of the highest profile American players will boost the numbers from around the world attending the World Championships in Copenhagen.

The crew from Footbag Spain are showing their Danish preparations with the regular series “Road to Copenhagen”. Below you can see the second episode. Paloma has also been in the Spanish news recently, capturing the headlines with her claim she would beat Ronaldo at footbag.

Preparations are well underway for Todexon 16. The famous Czech tournament was the official starting point for the Sport/Life European Footbag Tour in 2014. This year, battles will be added, and there will be a size requirement for the footbags used in the event.

The “king of footbag”, Vasek Klouda, has continued his strong form in freestyle football, recently hitting Janiwalker with the ball. You can see the video with this link. A number of footbag players appear in the recently released world rankings for freestyle football. See how many you can spot.

Anssi Sundberg has been putting up some videos from 2010 online. One can be seen below.

The next competition coming up is the 7th version of Venezuela’s Copa X-Pro net tournament. from February 28. Germany’s FC Footstar event will also be happening in early March. Don’t forget to keep trying the “Link of the Week”, as well as the Footbag Badges.

One Response to This Week in Footbag