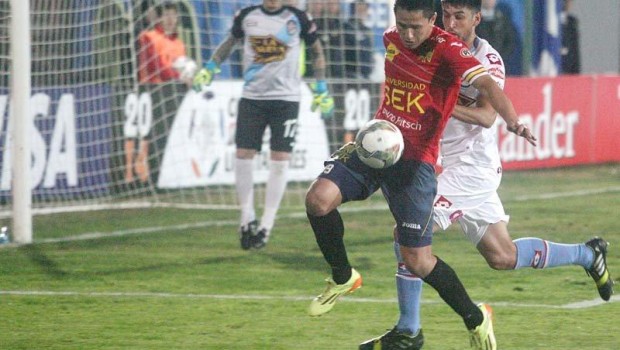 Unión Española´s hopes of reaching the Copa Libertadores quarter-finals for the first time in 20 years were dashed as they lost 1-0 at home to Arsenal de Sarandí.

Independencia – Unión fancied their chances after earning a 0-0 draw in the first leg in Argentina last week, but found it impossible to break down the visitors at Santa Laura.

Indeed, it was Arsenal who carved out the better chances. Ex-Rangers striker Milton Caraglio and Julio Furch both hit the crossbar in the first half.

But the visitors finally made the breakthrough – and notched an all-important away goal – when Diego Braghieri headed home in the 66th minute.

Unión huffed and puffed, but couldn’t find the two goals they needed to turn the tie around. Instead, Martín Palermo´s men will face Paraguay´s Nacional in the last eight.

After Universidad de Chile and O´Higgins were eliminated in the group stages, it means that Chilean interest in the Libertadores is over for this year.

Meanwhile, Palestino and Universidad de Concepción look favourites to earn a place in the Liguilla final after the first leg of their play-off ties.

Renato “the shark” Ramos headed home a superb winner as Palestino won 1-0 against Cobreloa in Antofagasta. It brought Cobreloa back down to earth following their 4-0 romp against Universidad de Chile at the weekend. The second leg takes place at La Cisterna at midday on Sunday.

Meanwhile, U de Conce drew 0-0 at Cobresal and will be favourites to win through when they host the second leg at Yumbel on Sunday (3.30pm). However, it could have been even better as the usually-reliable Gabriel Vargas fluffed a second-half penalty for the visitors.

The Liguilla winners earn a place in the Copa Sudamericana.