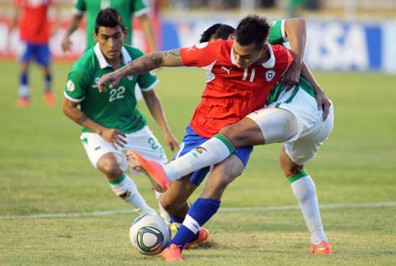 Hopes of a Chilean clash in the Europa League final came to nothing as Arturo Vidal, Mauricio Isla (both Juventus) and Eduardo Vargas (Valencia) suffered semi-final heartbreak.
Juventus were favourites to line up a home final when they took on Benfica. Juve trailed 2-1 from the first leg in Portugal and even a 1-0 win would have been enough for them to go through.
However, they couldn’t find the all-important goal despite carving out a host of opportunities. Midfielder Vidal was back in the starting line-up after his recent injury niggles and came as close as anyone to securing the Italians a place in the final.
His header looked as though it would find the back of the net, but Benfica defender Luisao got back to head it off the line.
Juventus played the last quarter of the match against ten men after Benfica’s Enzo Perez picked up a second yellow card on 67 minutes for a foul on Vidal, but they still couldn’t find a way through.
Vidal was substituted in the 79th minute, while team-mate Isla didn’t feature.
Meanwhile, striker Vargas and his Valencia team suffered an agonising exit at the hands of fellow Spanish side Sevilla.
Valencia had lost the first leg 2-0, but seemed set to pull off another great comeback when they went 3-0 up in the 70th minute.
However, Stephane Mbia, on-loan from QPR, powered home a header in the fifth minute of stoppage time to make it 3-1 and send Sevilla through to the final on away goals.
Vargas played the whole game, but wasn’t able to get on the scoresheet.
It means Sevilla will meet Benfica in the final at the Juventus Stadium on May 14.
One man who may not be too unhappy about the results is Chile boss Jorge Sampaoli as it means one match fewer for three of his players to worry about before the World Cup in June.