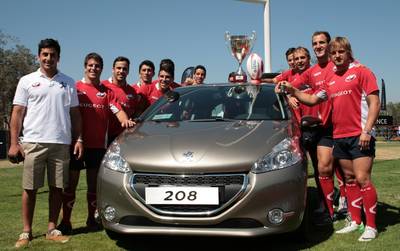 Thanks to the sponsorship of Peugeot, the successful squad that went through the Viña Seven tournament undefeated has received a luxury prize.

Ahead of the tournament, which is one of the biggest of its kind in South America, Peugeot General Manager Miguel Ángel Figari laid down the challenge. Any place on the podium would be rewarded with the use of the 208 model. 3 months for the bronze, 6 months for runner up and a year’s driving for the first place.

After beating Argentina twice along the road to an unprecedented victory, the players in the squad earned themselves a year of Peugeot driving each.

Chile 7 captain Felipe Brangier said of the achievement, “We are very happy to receive this prize, we can’t forget to thank Peugeot Chile and remember that the week in Reñaca, with a group of impeccable humans, a group of twelves player that have sacrificed for years to achieve personal goals and everything that comes with amateur sport, but we now have an unforgettable memory.”

New memories will continue to be built, with preparation matches for the South American Games due to take place between February 12 and 16, while the victory in Viña gave Chile a place at the prestigious Hong Kong Sevens. The condores recently travelled to Las Vegas to take part in the Sevens event there.

Subsecretary Eduardo Valenzuela highlighted the achievement of the players, saying the group were an example to what other Chilean athletes could achieve.

Chilean Olympic Committee Vice President Miguel Mujica expressed his satisfaction with the prize. The former president of the Chilean Rugby Federation said, “Peugeot’s gestures changes the axis of the way that marketing has been done. I congratulate them for this historic act, and to Chile for the achievement on the field.”