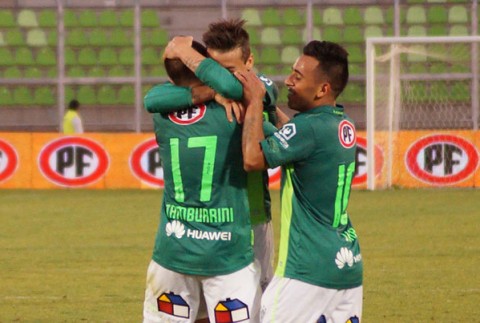 Santiago Wanderers remain in the Apertura title hunt after a last-gasp victory against Unión Española.
In one of only two top division matches played over the weekend, it looked as though the points were going to be shared until the last minute.
Then Wanderers carved out an opening for Pablo Tamburrini to fire a shot high into the net and finally get the better of Unión keeper Jonathan Salvador.
The victory means the Valparaíso-based outfit are third in the table, six points behind leaders Universidad de Chile and only one point adrift of second-placed Colo Colo.
In the other match, Leandro Benegas hit a hat-trick as Unión La Calera pulled off a stunning 4-0 win at Huachipato, who may well have had one eye on their Copa Sudamericana return clash against Sao Paulo on Wednesday.
Surprise package La Calera are up to fourth in the table, while Huachipto lie fifth.