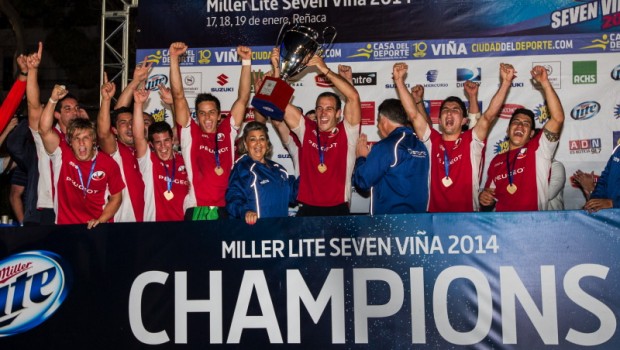 Two places in the world-famous Hong Kong Sevens will be up for grabs when Viña del Mar hosts the most important sevens competition in South America in January.
Viña beat off the competition to guarantee the two spots that give their tournament extra prestige. In 2015, the top teams in South America – Argentina, Uruguay, Chile and Brazil – are set to do battle. Peru, Venezuela, Paraguay and Colombia will seek to spring a surprise.
Chile will seek to repeat the 2014 victory that earned them a place in the Hong Kong World Series Sevens.
Confederación Sudamericana de Rugby (Consur) president Carlos Barbieri said: “Chile´s proposal was the best in terms of organisation and costs. In addition, this is the second year that they will organise it for the Consur.”
The event is organised by Demaria Marketing Deportivo along with hosts Old Mack´s and with the support of the Municipalidad de Viña del Mar and the Federación de Rugby.
Demaria Marketing Deportivo executive director Pablo Demaria said: “We are very proud to be able to offer these two places to Hong Kong at Viña del Mar.
“We participated in the process with other tournaments of the region, but finally I believe that our experience and how well we did it last year gave us the triumph.
“We thank the confidence of the Consur and we will produce a great tournament.”
Aside from the national teams, top sides from Chile and Argentina will compete in the club competition. The event is set to take place at Colegio Mackay in Reñaca from January 16 to 18.
*A regional winner is guaranteed when the final of the ADO 1 competition takes place on Saturday.
The honour of being the best club side in Chile will see Troncos, of Concepción, go head to head with Old Mack´s, of Viña del Mar, at the Colegio Craighouse pitches in Lo Barnechea (5.10pm).
In the semi-finals, Troncos defeated Stade Francais 31-22, while Old Mack´s pulled off a shock by beating COBS 19-17.