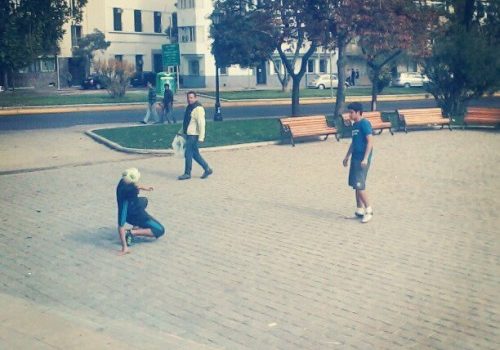 This is a story of modern times…

I sure have to say that today was a weird day. A couple of weeks ago, I finally came across some freestyle football players online. I haven’t discovered any footbag players, but at least it’s a pretty similar general idea. So every Sunday they meet at Bellas Artes. I went a fortnight ago, but couldn’t make it again last week.

So anyway, I got down there and we started playing. 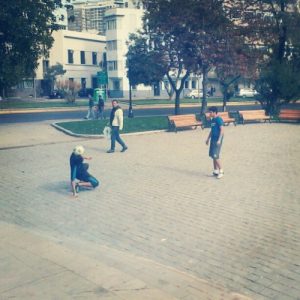 There are always some people walking by who want to have a kick around. Without fail, they kick the ball on to the road. It didn’t really matter today as that part of the street was blocked for some reason.
I filmed a couple of short little videos with my camera. I have to start making more and more use of that, particularly for filming things. Anyhow – I didn’t hit anything particularly special, no long runs. When you’re playing with others though – it doesn’t matter so much.
Particularly for me, I have been playing solo for six months now. I have really been missing the sessions with Caroline and Copey where you just call up and it’s time to play. So it has been good to find these guys.
Here is a short little video of three of us playing together. I think these kind of videos are always fun. There are some great ones of Honza, Vasek etc. I filmed one a couple of years back with “Bevs” when he was visiting Canberra.
Anyhow. Our next stop was Plaza de Armas, which is the main square of Santiago. We were going to put on a bit of a show and hopefully get some bucks. We played a while, then a policeman signalled to me that I should come over. I partly played stupid (the other part was that I didn’t really get it), and even now I wasn’t sure what he meant. I think to stop blocking the pathway as too many people were watching.
That was only the beginning of the weird adventure though. We were able to play a bit longer, then went into the city centre. The some girls approached us and asked if we could do a performance at their youth event. por que no?
Well I can tell you exactly por que no, but instead we went there. It was some sort of “modern” church just across the road from La Moneda, the presidential palace.
The kind of modern establishment where they murmur to themselves (speaking in tongues???), place hands on each others heads and, a more rare element – perform some kind of fashion show in the middle of proceedings.
Aside from the language barrier, I honestly couldn’t really understand what was going on. I don’t think I would have got it if it was in English either. I will just say that they were all completely crazy. After the “fashion show”, then there was some kind of contest where there was a crowd vote for the most popular, but yelling and screaming.
I think these were the exact types that old mate Jesus was throwing out when he cleared the traders from the temple. Anyhow, then there was some kind of dance off after the fashion show, and a couple of us presented our skills in that time. I have some video but I will have to make some edits to that, as it doesn’t look so good.
So some of us headed for the exit, but then it was decided to stay. The deal that had been struck was these bunch of crazy people would give more and more likes to the page of the freestyle group. A deal worth it? Who knows?
All I know is that it was definitely the most strange place I have given a footbag demonstration. It even beats out the Castlemaine Prison!