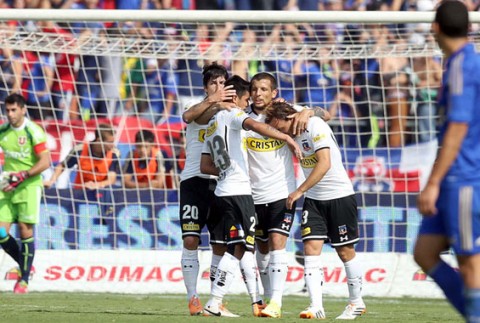 Colo Colo moved to within one win of the Clausura title with a hard-fought 1-0 derby victory at arch-rivals Universidad de Chile.

Ñuñoa – However, on an afternoon when Roberto Cereceda´s first half own goal proved decisive, there were some incidents that scarred the day.

There were 28 arrests made for different acts of violence, including Colo Colo midfielder Jason Silva, who spent the night in the cells.

The substitute was arrested after the match for stupidly stamping on and kicking a la U banner, and faces strong sanctions for his actions against the law of violence in the stadiums.

On the pitch, Colo Colo had to dig deep to earn three precious points. The flowing football of earlier in the season was forgotten as the visitors defended stoutly to win the Superclásico.

Universidad de Chile were the stronger side, but they lacked the finishing touch on the day and paid a heavy price.

On the half-hour mark, Felipe Flores swung over a cross from a Colo Colo counter-attack and Cereceda´s spectacular slice from the edge of the box lifted the ball agonisingly over his own keeper, Johnny Herrera.

La U, and Pato Rubio in particular, were frustrated in the second half. Rubio thought he should have had a penalty when Flores tugged him over in the box and also saw a goal ruled out for a push on Gonzalo Fierro.

Colo Colo´s Claudio Baeza was sent off for his second bookable offence in the 68th minute, but la U couldn´t make their numerical superiority count. The numbers were even again when Universidad de Chile´s Ramón Fernandez was dismissed for a wreckless challenge in the 87th minute.

The midfielder could face a stronger punishment after pushing referee Eduardo Gamboa in the immediate aftermath of his red card.

Delighted Colo Colo boss Héctor Tapia said: “The effort and understanding, further of to know how to read the game on the pitch, helped us win a Clásico that gives us three really valuable points in our bid to win the title.

“We are a game away from winning the title and we have to enjoy it.”

Colo Colo can wrap up their coveted 30th title with victory against Santiago Wanderers at the Estadio Monumental next Sunday. However, they could be crowned without kicking a ball if second-placed Universidad Católica lose at home against Antofagasta the day before.

Colo Colo´s win was a kick in the teeth for Católica, who had cut the albos´ lead to four points by beating relegation-haunted Everton 3-1 on Saturday night.

Fernando Cordero, Darío Bottinelli, with a superb free-kick, and skipper Cristián Álvarez, with a magnificent long-range effort, scored the goals for the Cruzados.

Third-placed O´Higgins can´t repeat their Apertura title success following their agonising 2-1 defeat at improving Cobreloa. Miguel Sanhueza notched the winner for the hosts in the fourth minute of stoppage time.

Fourth-placed Palestino were held to a 1-1 draw at Cobresal, while fifth-placed Iquique went down 3-0 at Audax Italiano, who boosted their survival chances.

Unión La Calera also did themselves a power of good by thrashing Unión Española 4-0 thanks to doubles from Leandro Benegas and ex-Union striker Rodrigo Gattas.

Bottom-of-the-table Rangers kept their slim hopes alive with a vital 1-0 home win against Santiago Wanderers, while Universidad de Concepción denied Huachipato at the death in a 1-1 draw. Antofagasta beat Ñublense 1-0 with a great finish from Luis Valenzuela in the 88th minute.