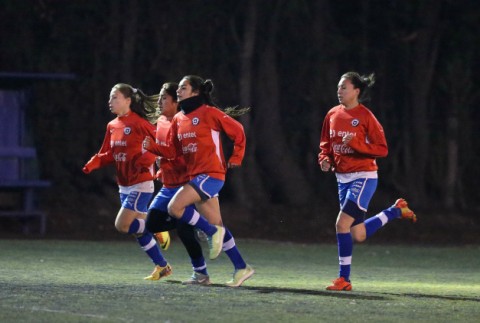 Chile’s women’s footballers have completed the first stage of their preparations for the Copa América in Ecuador in September.

Ronnie Radonich’s troops had been training every Monday, Tuesday and Wednesday at the sporting complex at Quilín.

The next step begins on Monday when the squad begin to train twice a day and from Monday to Thursday. On Monday, July 14, they will begin a concentration at a Santiago hotel.

The reason for the intensive preparation is not only to perform well in the Copa América, but also because of the rewards on offer in terms of qualification for other tournaments.

The winners, or runners-up if Brazil triumph, will accompany Brazil as the representative of the Conmebol in the Olympic Games in Rio in 2016.

The finalists will represent South American in the Women’s World Cup in Canada next year, while the team that finishes third will go into a play-off with a team from the Concacaf region.

In addition, the first four will qualify for the Panamerican Games in Toronto, Canada, next year.

Chile’s squad is made up of 31 players. Twenty-nine players are home-based, while goalkeeper Christiane Endler and striker María José Rojas play for Chelsea and Gulf Coast Texans respectively.

La Roja have been drawn in Group B alongside Brazil, Argentina, Paraguay and Bolivia.