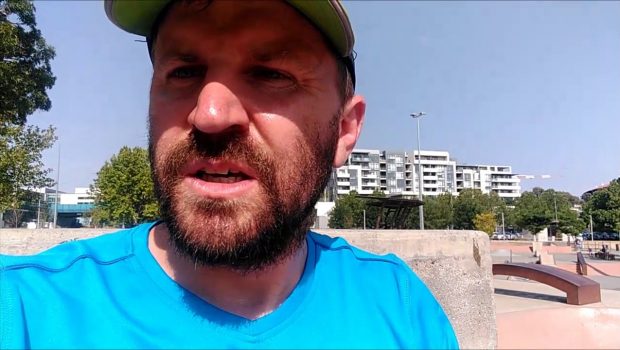 Back to Belco to kick off a new decade.

As I mentioned in the vlog, this is a place I’ve spent a lot of time at over the years. Before I came to university, I made a trip down from Sydney for the Open Day. I was much more interested in the park and the Belco Ledges and that had me excited to move to Canberra the following year.

It’s getting to be a long while since then, Belco has had a remodel and I’m still rolling around without too many serious injuries over those years. It was predicted to be a very hot day so I tried to get in early to beat the heat. That plan didn’t really work but it was an enjoyable morning regardless.

There’s a lot of memories there for the good old Belco skatepark but I’m glad I can keep making new memories there too. I’ve been able to get out and about on the skates a little more in recent times. The smoky weather hasn’t allowed me out to start of the year but things have cleared up a little.

Trying to beat the heat. Already too late.

New crossover discipline. #footbag on rollerblades. @canberrarollerblading early stages but this could be fun.

The new little stunt I’m working on is actually something I probably had a little better back in high school – footbag on rollerblades. Maybe a good way to fall over but that’s something fairly unique. Not sure I’ve heard of anybody else doing that before.

So this is the first vlog for the new decade, hopefully I can pump out a few more of them over time. Nico and I head to Western Australia next week so keep an eye out for something about that.

One Response to Capital Eyes – Vlog 67 – Back to Belco