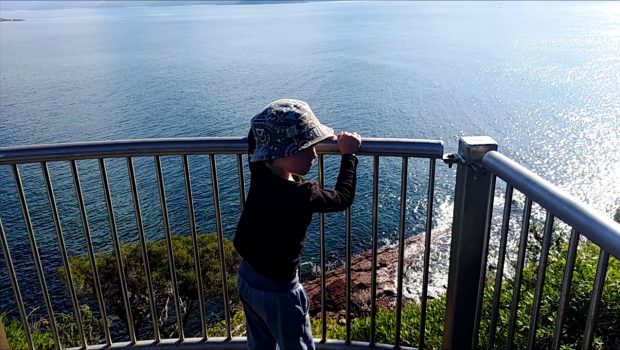 Eden and beyond. Travel on the NSW South Coast towards Green Cape Lighthouse.

This vlog was one of a bunch I was able to create after a trip down the coast with Nico and my Dad. The boys weekend was had while the girls team were over in Chile.

I have already published one from our day out at Picnic Point, while these next ones come from a trip south of Eden, to Green Cape Lighthouse. The lighthouse itself has a vlog set for it, so I will save that for later, but it is well worth the visit.

For a long time, Nico has really enjoyed the book called The Whalers, with illustrations from Bronwyn Bancroft. I have said many times we should go and visit the Davidson Whaling Station.

From my memories of a school excursion, I thought there was a lot more you could see. You were not able to go into the house without an appointment, so it was actually a little bit disappointing on what we could see, but there were great views.

Before getting down to the lighthouse, we visited Boyd Tower and had a swim at Bittangabee Bay. It was hard to believe that the next day, when icy winds were trying to blow us away.

This area south of Eden is a part of the world I have not spent so much time in. It’s certainly worth a visit.