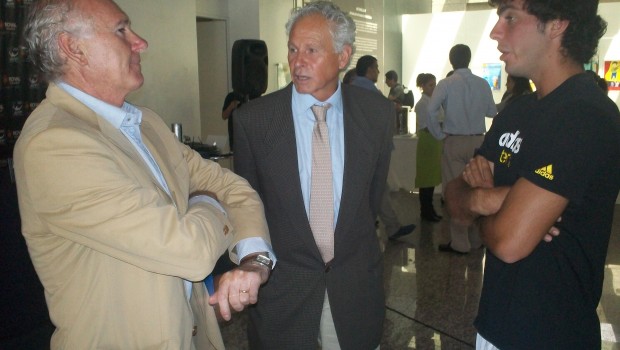 Christian Garín and Nicolas Jarry teamed up in the doubles at the Royal Guard Open in Viña del Mar, with the young Chilean pair moving through to the next round.

While Garín suffered defeat in both singles and doubles in Chile’s disastrous Davis Cup campaign, Jarry’s strong run came to an end in his first professional final, played in the Futuros 1 tournament in Argentina.

While Chile went into the Davis Cup against Barbados confident their stronger ranking would hold them in good stead, this time the tables were turned. Jarry is ranked 700 in doubles, while Garin’s position is slightly higher at 543. Despite the gap against Christopher Kas (Germany, 45) and Andre Sa (Brazil, 64), the young Chilean pair took just over an hour to finish off their opposition.

The final score of 6-2, 6-4 put the Chilean wildcards through to the next round, where they will face the Colombian pairing of Juan Cabal (44) y Robert Farah (50).

Garín will return to action in the singles, hoping to get his revenge against Frenchman Jeremy Chardy, who knocked him out of the tournament last year. Reigning champion Horacio Zeballos will face Chile’s other hope, Gonzalo Lama. Despite his victory over Rafael Nadal in the 2013 final, Zeballos is unseeded for the tournament.

Lama will be doing double duty on the centre court, having received a wildcard alongside Juan Carlos Sáez in the doubles. They will face the Italian duo of Potito Starace and Danielle Braccali. Things don’t get any easier for “El Léon”, with Starace also finding victory over Nadal in the doubles final in 2013.

Second seed Tommy Robredo will open the play at 2 p.m. at La Salinas.