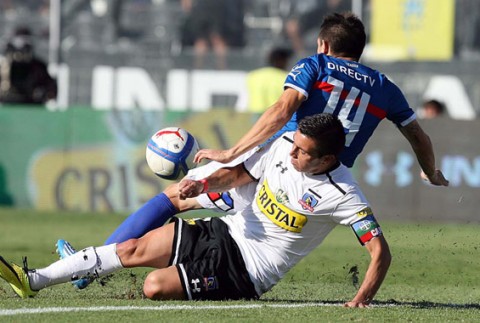 Champions Colo Colo were held to a 2-2 draw by Universidad Católica in the clásico, but that was overshadowed by reports that albos boss Héctor Tapia could exit the club.

Macul – Tapia and his assistant Miguel Riffo are reported to be in conflict with owners Blanco y Negro´s sporting director, Juan Gutiérrez, and that has sparked the uncertainty over Tapia´s future.

However, it would be amazing if Colo Colo let the man who turned their fortunes around and secured their 30th title slip through their fingers.

On the pitch, Colo Colo led twice through fine goals from Emiliano Vecchio (3) and Felipe Flores (36), but Católica hit back twice through Ramiro Costa (34) and José Luis Muñoz (39).

Costa had an eventful afternoon as he was involved in the clash with Justo Villar that saw the Colo Colo keeper go off injured in the 33rd minute and was then sent off in the 42nd minute for a foul on Gonzalo Fierro.

However, Colo Colo couldn´t take advantage of their extra man in the second half and had to settle for a point.

It means they miss out on playing the Supercopa, which will be contested between the Copa Chile winners (Iquique) and the team with the best annual record of the two champions of the past year (O’Higgins). Colo Colo (63) trail O’Higgins (68) by five points with just one match left.

Palestino, fourth, lost 1-0 at home to fifth-placed Iquique. César Pinares scored a superb winner in the 26th minute.
Universidad de Concepción continued Universidad de Chile´s miserable run by beating them 1-0 thanks to Pedro Muñoz´s goal on the hour mark, while Antofagasta won by the same score at Cobreloa courtesy of a Javier Elizondo effort.
At the other end of the table, it proved to be the end of the road for Rangers. The Talca-based outfit lost their crucial relegation tussle against Audax Italiano 2-0 at home.

Bryan Carrasco and Felipe Mora, pen, scored the second half goals that condemned Jorge Garcés’ men and sparked the fury of the home fans.

Audax have jumped to fourth bottom in the annual table, but will go into next Saturday´s final match, at home against Palestino, still in danger of the drop.

Everton are the club currently in the second automatic relegation spot. They could only draw 1-1 against Ñublense at Santa Laura last night and will have to get something from their final match at Huachipato to avoid the drop.
Huachipato gave their survival chances a massive boost with an astonishing 6-0 win in their relegation six-pointer at Unión La Calera. David Llanos hit a hat-trick and is now the leading scorer in the Clausura with 13 goals.
The acereros lie 13th in the accumulated table and just a point next week would guarantee their safety. Third-bottom La Calera, meanwhile, face a testing trip to second-placed Universidad Católica.

Santiago Wanderers round off the 16th round of fixtures with a home match against Cobresal this evening and know that a victory will guarantee their top-flight status.