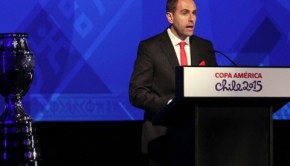 There’s the little matter of the World Cup to come first, but Chile have already launched the Copa América 2015