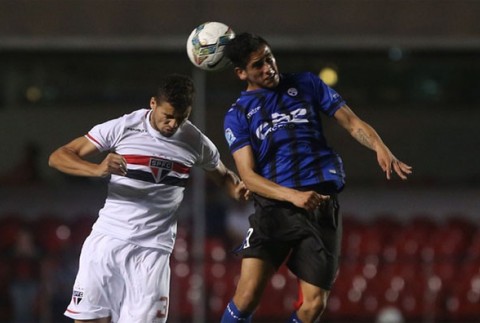 Chilean interest in this year´s Copa Sudamericana is over after Huachipato bowed out against Sao Paulo in the last 16.
Trailing 1-0 from the first leg in Brazil, the acereros knew it was vital not to concede an early goal.
However, that was exactly what happened as first leg scorer Michel Bastos opened the scoring on nine minutes.
Needing to score three to get through, Huachipato gave themselves a glimmer of hope when Andrés Vilches levelled things up in the 20th minute.
But that was snuffed out two minutes later when Ganso put the Brazilians back in front.
The 36th minute dismissal of Sao Paulo´s Denilson gave Huachipato a man advantage, as in the first leg in Brazil, but they had to wait until the 88th minute to draw level again, Ángelo Sagal netting.
But Gabriel Boschilia restored Sao Paulo´s lead almost immediate to make it 3-2 on the night and 4-2 on aggregate.
After winning through a couple of rounds, Huachipato join Universidad Católica, Iquique and Cobresal on the sidelines.
*Primera B outfit Unión San Felipe pulled off a major shock in the Copa Chile by knocking out Santiago Wanderers.
Top-flight Wanderers won 2-1 in San Felipe in the first leg to seemingly put themselves in control, but San Felipe turned the tables to win 1-0 in Valparaíso.
The Primera B team then won through to the quarter-finals by triumphing 6-5 on penalties.
Universiad de Concepción and Palestino are also through to the last eight. U de Conce beat Lota Schwager 4-2 at home after a goalless first leg, while the árabes thrashed Magallanes 4-1 to revert a 2-0 first leg deficit.