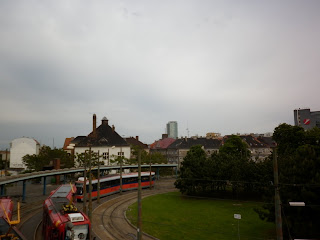 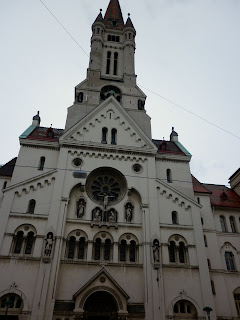 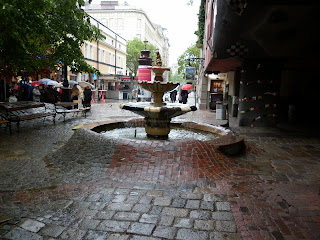 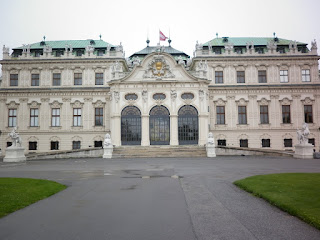 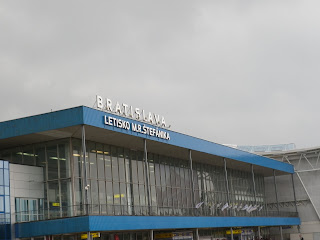 I was flying from Stansted to Bratislava in Slovakia. I wasn’t in the best condition, but I got myself onto the plane. I sat down and went almost immediately to sleep. I woke up as we started our descent after a good snooze. I had slept all the way to Stansted on the bus, then almost all the way on the plane. That meant I was running on about 3 hours sleep. I wasn’t in great condition. Outside it was freezing cold and raining. So this is Spring.

I thought about doing a bit of sightseeing in Bratislava, but decided that could wait til I came back from Vienna, on my way to Barcelona. Anyhow, the next train to Vienna was coming in ten minutes, why bother wandering around in the rain. So I went to Vienna and wandered in the rain there. I had no map, not really a lot of idea where I was. I spent a week in Vienna last year, I thought I had a pretty good lay of the land, but as a matter of fact, I thought wrong.

I stopped at a schnitzel haus, I think this was an excellent idea. I wasn’t really sure about my plan of attack, I had to wait until my friend Alex finished work, then I would go to his house. I had a long wait ahead. I thought about just checking into a hostel and sleeping there for the first night, but I didn’t see any in my wanderings. I was also hoping to find somewhere where I could get free Wifi. I ended up going to Starbucks because you can get half an hour free if you buy a drink. A lot of people had the same idea, it was very warm in there. For a city famed for its cafe culture, I didn’t see a lot of cafes in my wanderings.

I wandered down to the Museums Quartier, decided to go to look at a museum. Unfortunately in Vienna, the museums cost money. I went to the Leopold Museum, which is a collection mainly of Austrian modern art. The first painting was a self portrait of a male nude. A pretty full on beginning. I should have known better than to go to a modern art gallery, but once again, it was warm in there. My time in the gallery mainly consisted of sitting down in the chairs at the centre of each gallery with vague looks at some painting.

Once out of there, I decided to just take a train, somewhere. I got on and decided to go to Ottakring, the end of Linien U3. Why not. I got out of the station, walked around the block, and went back to the station. I wasn’t sure where to go next, I think I fell asleep and rode the line either way a couple of times.

I got out in the city and wandered around a while, then it was time to call Alex. He was home from a big lunch for his mum’s birthday. That evening we went to meet some of the other Footbag players at Verena’s house. All the Austrian players were so nice to me at Worlds last year, even more when I visited them in Vienna, it was great to visit them again.