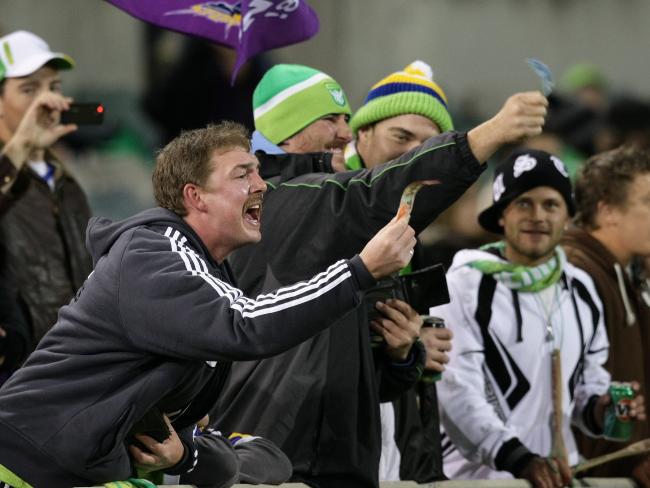 Raiders fans wave money at the cheats from Melbourne
I will continue my tales about my trip I took recently. I better finish it off before I go on another trip, it’s just over a month before I head to San Francisco for the World Footbag Championships. I’ll set the scene, we’re at the Walkabout, one of those “Aussie pubs”, it’s 10:30am and the Green Machine are on TV.

We got away in time, and walked in to the pub right on kick off. There was an AFL game on the big screen (Geelong v Brisbane) and the Reds were playing Super 14 on the next screen with the commentary on. We sat behind a bloke in a Raiders jersey watching the silent screen. I went up to the bar and asked if we could get the sound on but he told me it couldn’t be done. Soon enough he realised no one was watching the Reds, and switched the Green Machine on to the TV with sound. That was more like it.

So the Raiders lost to a team one million dollars over the salary cap. They were cheated by the video ref on three occasions against a bunch of cheats. Normally these would leave me disgruntled, possibly a pathetic mess for the rest of the day, but I didn’t care. It was nice to be able to see the game at all, and we had more important business at hand, the table tennis table was back out.

I was on a hot run, I think I won five in a row, to add to my victory from a couple of nights before. As the beer went down though, so did my skills. It seemed like everyone else was coming back into the games. Suddenly the run was over. We had some burgers for lunch, they were absolutely enormous, it was awesome. The last game of table tennis, I finally had another win over Matthew, our new Raiders mate.

Some of his friends were watching the AFL game, one Cats fan, one Brisbane. One happy, one sad. Brisbane were absolutely pumped. Funnily enough both girls were from Geelong. They invited us to a picnic in the park, it sounded good. I had planned on going to Cambridge that afternoon to visit Matt Bailey, but the more beer I drunk, the further away Cambridge seemed, and the more likely missing my plane early the next morning seemed.

There was a bit of sun out, it was a nice day to just be hanging out in a park with some new friends. Matthew bought a soccerball, so we started kicking that around, whilst drinking more beer. I though this was a perfect way to finish up my time in England. Eventually the picnic came to an end. In that time, Dan said to our fellow picnicers that I may be the most famous person to come from our year in high school. I have been thinking about this in my head since that day, and all it makes me do is worry about the other people who were in that year. Once they left, Dan told me one of the girls seemed to be making moves on me, inching closer all the time, hanging on to every word I said. I honestly had no idea, but found it quite humorous.

After the picnic, we met some young guys who were kicking a ball around, they were pretty good, made us look like fools really, drunk fools, which was exactly what we were, though I had a couple of tricky moves up my sleeve, which never fail to impress. No matter how drunk I am.

We kept drinking, until I caught the bus to the airport. That was at 3am. What a ridiculously big day.