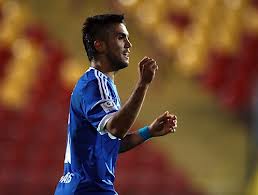 Chilean midfielder Pedro Morales has been given the honour of captaining Vancouver Whitecaps in the MLS following the retirement of former US international Jay DeMerit.
DeMerit called time on his remarkable career due to injury yesterday. The 34-year-old climbed from Sunday League park football to the World Cup in a rags to riches story.
But the former Watford centre-back has now been forced to call it a day and that´s given ex-Huachipato and Universidad de Chile midfielder Morales the chance to take over.
The 29-year-old has plenty of experience following spells with Dinamo Zagreb and Malaga, and is looking forward to his new challenge. However, he admitted that following in DeMerit´s foosteps won´t be easy.
In a message to his former skipper on www.whitecapsfc.com, Chilean international Morales said: “I know that many of the young players will always look up to you, for your work and professionalism. Without a doubt you will be in the memories of the fans and of all those people that will remember every moment of your career.
“It will be an honour for me to wear the captain’s band on my arm, but I know that I could not replace you, only to try to give my all for the team and I hope to be able to exhibit the same energy you did.”