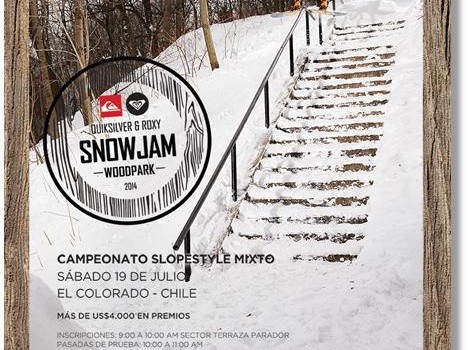 Normally known as the Roxy Snowjam, this year’s event has Quiksilver on board and will be a mixed event, with men having the chance to try to claim the title for the first time.

To be held at El Colorado on Saturday July 19, the Quiksilver & Roxy Snowjam will bring together some of Chile’s star winter athletes, including Sochi Olympian Dominique Ohaco and reigning snowboard champion Antonia Yañez.

Over 60 athletes are expected to throw themselves down the slopes during the event, hoping to impress with both speed and style as they make their way over the terrain, with US$4,000 of prize money up for grabs.

The event will be held in El Colorado’s “Woodpark”, which looks to emulate runs seen in some of the best ski centres from the Northern Hemisphere. A sunset meet and greet will also be held after the action.