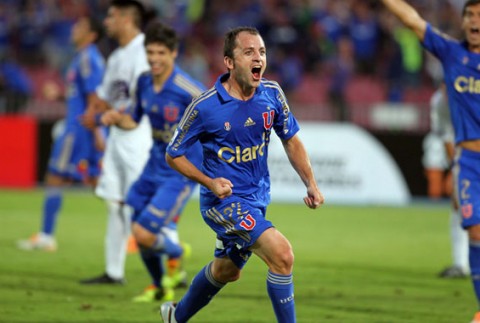 Universidad de Chile and Unión Española will have to raise their game when they take on Brazilian opposition in the Copa Libertadores.

Belo Horizonte – La U get the ball rolling later this afternoon (5.30pm) when they take on Cruzeiro in the Estadio Mineirao – and it promises to be a searching examination.

In fact, Cristián Romero´s troops will become the first Chilean team to beat Cruzeiro on Brazilian soil if they can pull off a shock result. Cruzeiro have won ten and drawn three of their home clashes against Chilean opposition.

La U have wobbled in the Clausura of late, but at least they have three points from their opening Copa Libertadores Group 5 game against Defensor Sporting on the board. Gustavo Lorenzetti scored the crucial goal in the 1-0 home win.

And, strangely, it is Cruzeiro who are currently bottom of the group, albeit having only played one game. They went down to a shock 2-1 defeat in their opening match against Real Garcilaso in Peru, while Defensor Sporting recovered from their defeat against La U to thrash the Peruvians 4-1 at home.

It means Cruzeiro will be even more determined to make it a four-way fight at the top by winning this afternoon. And they will also be eager to win on their return to Copa Libertadores action in their home stadium – they haven´t played at the Mineirao in South America´s top club competition for four years due to rebuilding work.

Romero has stressed that his players mustn´t allow Cruzeiro to become comfortable on the ball. They need to get in and break up the play.

He said: “We must play to the limit, to the maximum and we have to neutralise Cruzeiro. To do that, we must be fully concentrated.”

Meanwhile, Unión Española must put their 3-1 defeat against Everton at the weekend behind them when they host Botafogo at Estadio Santa Laura tomorrow night (7.45pm).

Unión began their Libertadores campaign with a creditable 2-2 draw at Ecuador´s Independiente del Valle last week, but face a step up in class in their second Group 2 clash.

Unión´s hopes have been hit by an injury crisis. They are expected to be without captain Gonzalo Villagra, Diego Scotti, Sebastián Jaime, Mario Larenas and Dagoberto Currimilla.

Chile´s other Libertadores representatives, O´Higgins, aren´t in action this week.