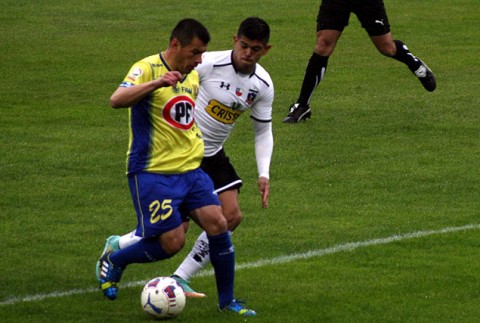 Colo Colo crashed out of the Copa Chile at the hands of bogey team Universidad de Concepción – and blew their chances of playing in two international tournaments next year.
In their final Group 5 match, the albos only needed a point at the estadio CAP to qualify for the last 16. However, they slumped to a disastrous 3-0 defeat against already-qualified U de Conce.
Colo Colo then had to hope that Palestino didn´t beat Rangers in the other Group 5 match. However, the árabes won 1-0 in Talca to take the second spot on goal difference.
All seemed to be going to plan when an under-strength U de Conce and Colo Colo – missing key men Esteban Paredes and Jaime Valdés – played out a goalless first half. However, Marcelo Aguirre fired the Campanil ahead in the 51st minute and a bizarre own-goal from Esteban Pavez six minutes later doubled their lead.
Ex-Colo Colo midfielder Fabián Benítez gained a measure of revenge for his nightmare spell with the albos when he curled home a superb third in the 86th minute.
Colo Colo haven´t been able to get the better of Univeridad de Concepción in their last eight outings – and join fellow ´grandes´ Universidad de Chile and Universidad Católica in making an early Copa Chile exit.
Colo Colo had already booked their place in next year´s Copa Libertadores by winning last season´s Clausura. The only way they could also play in the Copa Sudamericana next year was by winning the Copa Chile, so that widely stated ambition of manager Héctor Tapia has fallen by the wayside.
The shell-shocked Colo Colo boss said: “We are missing something when we play against this team – the balance is clearly negative.
“The defeat pains us a lot because the objective was to qualify. We have to offer apologies to our fans and now focus on the league.”
Aside from U de Conce and Palestino, the other qualifiers for the last 16 are: Audax Italiano, Magallanes, Coquimbo Unido, Cobresal, Antofagasta, San Marcos de Arica, Unión Española, Uníon San Felipe, Lota Schwager, Deportes Temuco, Santiago Wanderers, San Luis, Ñublense and Curicó Unido.