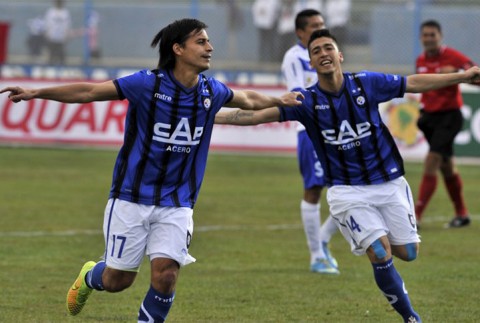 Huachipato ensured there will be Chilean representation in the second round of the Copa Sudamericana by triumphing in Bolivia.
The acereros had notched up a 3-1 home win against San José in the home leg last week, but a tricky test in the Oruro altitude was expected in the return.
However, Mario Salas´s troops proved more than up to the challenge and ran out 3-2 victors to take the tie 6-3 on aggregate.
Huachipato virtually killed off the first round match in the opening half. The in-form Lucas Simón opened the scoring in the 18th minute and then Carlos Espinosa scored from the penalty spot on 34 minutes after a foul on Chilean call-up Martín Rodríguez.
Cristián Díaz pulled one back for the Bolivians from the penalty spot three minutes after half-time, but they were unable to get back on terms.
Instead, it was Huachipato who sealed victory when Leonardo Povea scored in the 84th minute. Even a second from Díaz in stoppage time couldn´t take the gloss off Huachipato´s night.
The acereros will now meet either Universidad Católica, of Ecuador, or Venezuela´s Deportivo Anzoátegui in the second round.
Meanwhile, Deportes Iquique, Cobresal and Universidad Católica will bid to join Huachipato in the next round when they play their second legs this week.
All three need to overturn deficits to make it through.