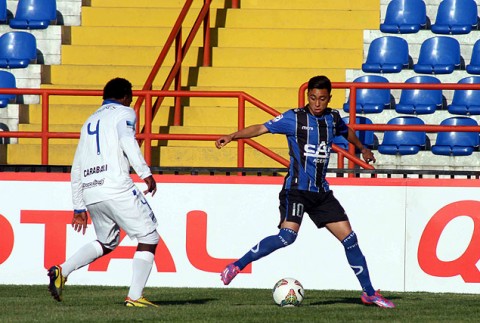 Huachipato have lined up an attractive tie against Brazilians Sao Paulo in the last 16 of the Copa Sudamericana.
The acereros lost 1-0 against Ecuador´s Universidad Católica in Quito last night, but had won the first leg 2-0 at home the week before.
It was the two Andrés Vilches strikes at the estadio CAP that ultimately proved decisive, but Huachipato were also indebted to an excellent display from goalkeeper Miguel Jiménez in the Quito altitude.
Mario Salas´s troops were forced onto the backfoot by the Ecuador outfit and were up against it when Facundo Martínez scored from the penalty spot in the 34th minute.
But a combination of good goalkeeping from Jiménez and some stout defending saw the acereros hang on to their first leg advantage.
Huachipato weren´t at their best, but they won´t care about that after bagging a last 16 clash against a Sao Paulo squad that includes the likes of Kaká, Alexandre Pato, Luis Fabiano and Ganso.
The first leg is scheduled to take place in Brazil next Tuesday.
Huachipato will hope to emulate the shock 2-1 win they achieved against Gremio in Brazil in the Copa Libertadores in February last year.
Their success has salvaged Chile´s pride after its other three representatives – Universidad Católica, Iquique and Cobresal – fell at the first hurdle.