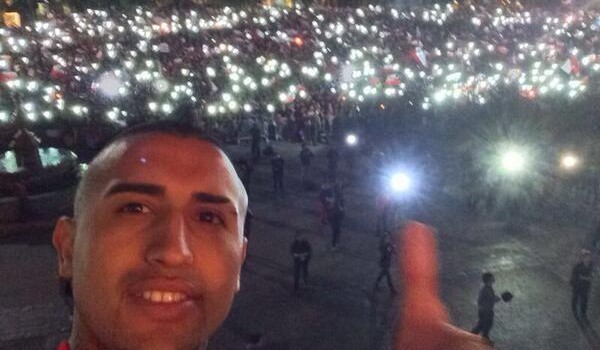 Chile´s footballers received a heroes´ welcome when they arrived back in Santiago on Sunday afternoon.
Crowds of fans packed the route from the airport to the presidential palace, La Moneda, to show their appreciation of the team´s efforts in the World Cup in Brazil.
La Roja came agonisingly close to knocking out the five-time champions on their home turf, eventually losing 3-2 in a dramatic penalty shoot-out in the last 16 tie.
Before that, Chile had beaten Austalia 3-1 in their opening match, taken the scalp of world champions Spain 2-0 and lost 2-0 to Holland, who are now through to the quarter-finals after seeing off Mexico late on.
An estimated 10,000 fans waited outside La Moneda to welcome the team back, while the President Michelle Bachelet received the management team and squad.
She said: “You were an example of effort, courage and fight. You gave us moments of great happiness.”
Various players thanked the supporters via social networks for the amazing reception they received.
Striker Mauricio Pinilla, who hit the crossbar in the last minute of extra-time and then missed his spot-kick in the shoot-out, said: “How marvellous it is to be Chilean – thanks from the heart.”
Midfielder Arturo Vidal said: “Thanks Chile. Yesterday a dream finished, but today another begins. We´re going to fight from now to win our Copa America next year!”
Fellow midfielder Marcelo Díaz added: “Goodbye Brazil. It´s been a wonderful experience, but equally we´re sad because we didn´t deserve to go out like that. Football owes us one.”