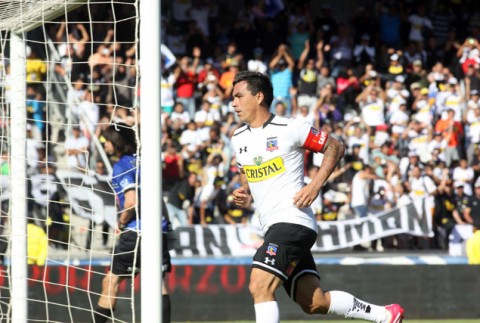 Esteban Paredes banged in five goals as Colo Colo rounded off their title-winning season with a stunning 5-3 win at Ñublense.
Chillán – Paredes went into the match two goals behind Huachipato´s David Llanos in the goalscorers´ chart, but ended up comfortably taking top spot with his astonishing five-goal haul.
Paredes took his tally to 16 with goals on 40, 43, 56, 65 (pen) and 85 minutes as Colo Colo held off a determined Ñublense challenge.
Later in the day, Paredes´ glory day was capped when he was named in Chile boss Jorge Sampaoli´s initial domestic list for the World Cup.
While the Chilean international celebrated a stunning feat, it proved to be a weekend of misery for Everton. The Viña del Mar side were relegated from the Primera Division after their 0-0 draw at Huachipato on Saturday.
Nelson Acosta´s Everton couldn´t find the goal they needed to save themselves and went down because they had a worse goal difference than Unión La Calera, who earned a crucial 1-1 draw at runners-up Universidad Católica.
Leandro Benegas gave La Calera the lead in the opening minute, but Católica levelled thanks to Michael Ríos´s superb 78th-minute curler. Indeed, the woodwork saved the visitors from losing the match – and being relegated – right at the death, Católica´s Enzo Andía hitting the crossbar.
Audax Italiano were another club breathing a sigh of relief on Saturday night as their 1-1 home draw against Palestino secured their top-flight status.
Universidad de Chile brought the curtain down on a terrible season with an awful 4-0 defeat at home against Cobreloa. La U finished the season in 12th place after losing nine of their 17 matches and only Ñublense (10) suffered more defeats in the Clausura.
O´Higgins finished third after their 1-1 home draw against already-relegated Rangers, while Universidad de Concepción took fourth after their 1-0 win at Iquique, who came seventh. Michael Lepe scored the only goal in the 63rd minute.
Antofagasta and Santiago Wanderers both missed out on the end of season Liguilla after playing out a 1-1 draw.
Unión Española played a weakened team at Cobresal on Sunday due to their Copa Libertadores interests and the hosts took advantage to win 2-0 and snatch the last play-off spot.
The play-offs, for a place in the Copa Sudamericana, get underway on Wednesday when Cobresal host Universidad de Concepción (4pm) and Cobreloa entertain Palestino (7.30pm in Antofagasta). The second legs take place on Sunday.