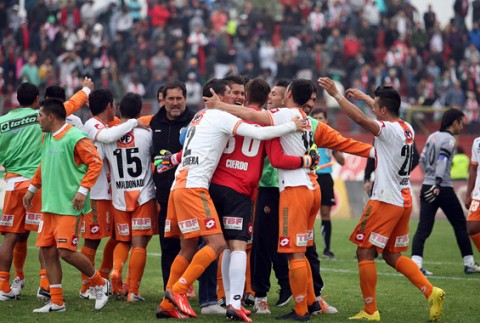 Jubilant Cobresal booked their return to international competition after a 28-year absence with a dramatic 2-1 defeat at Palestino, taking the tie 3-2 on aggregate.
La Cisterna – Cobresal came into the return with a 2-0 lead from the first leg at home in midweek, but expected a tough match against the árabes – and that was exactly how it turned out.
However, Palestino didn’t help their own cause by having two players sent off and missing a penalty in an all-action encounter.
Sergio López was the first player sent off. He saw red in the 36th minute for an elbow. However, the árabes put that blow behind them and were right back in the tie when Esteban Carvajal struck in first half stoppage time.
The tie could have been all-square in the 51st minute, but Juan Ignacio Duma fired over from the penalty spot. Things got worse for the home side four minutes later when Renato ´the shark´ Ramos became their second player dismissed. The experienced striker was sent off after clashing with Cobresal´s Patricio Jerez.
Down to nine men, it looked as though Palestino had an impossible task, but, amazingly, they levelled the tie on aggregate in the 59th minute through Rodrigo Riquelme.
Cobresal kept their cool and Felipe Salinas connected with a 67th minute corner to cut the deficit to 2-1, but, more importantly, put them 3-2 up on aggregate.
There was no way back for the nine men and it was the visitors from El Salvador who celebrated at the final whistle.
Cobresal snuck into the play-offs in tenth place and then beat Universidad de Concepción and Palestino to earn their place in the Copa Sudamericana, where they join Deportes Iquique, Universidad Católica and Huachipato.