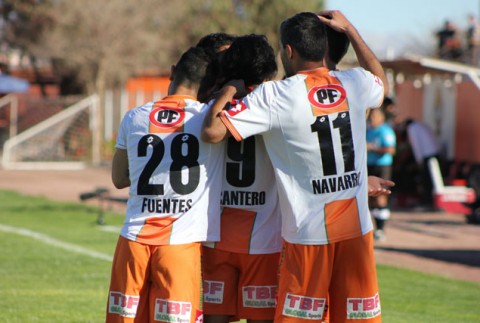 Cobresal finished in the bottom half of the Clausura table – and yet they´re now on the brink of qualifying for the Copa Sudamericana.
It´s one of the quirks of the Chilean football system that a team that came 10th out of 18 could have the chance of qualifying for international competition.
With a host of clubs ruled out for one reason or another, the play-offs opened up with the teams that finished fourth (Universidad de Concepción), fifth (Palestino), eighth (Cobreloa) and tenth (Cobresal) in the Clausura.
But no one can argue that Cobresal haven´t made the most of their opportunity to bring continental football back to El Salvador for the first time since 1986.
They knocked out Univesidad de Concepción in dramatic fashion in the semi-finals and now have a healthy two-goal lead to their name from the first leg of their final against Palestino.
The ever-reliable Ever Cantero latched onto a long ball, raced in on goal and coolly finished past Felipe Núñez to open the scoring in the 14th minute at El Cobre.
Palestino´s Diego Rosende was sent off for his second booking in the 81st minute and Cobresal took full advantage. Lino Maldonado snaffled up a rebound in the 87th minute to double the lead.
It means Palestino, fresh from thrashing Cobreloa 5-0 on aggregate, have it all to do in the second leg in Santiago on Sunday. The match kicks off at noon at La Cisterna.
Cobresal boss José Cantillana said: “Palestino´s possession of the ball could be their strength in Santiago, so we have to be fully concentrated.”
Meanwhile, recently relegated Everton are looking for a new manager after Nelson Acosta decided to step aside following their relegation to the Primera B.