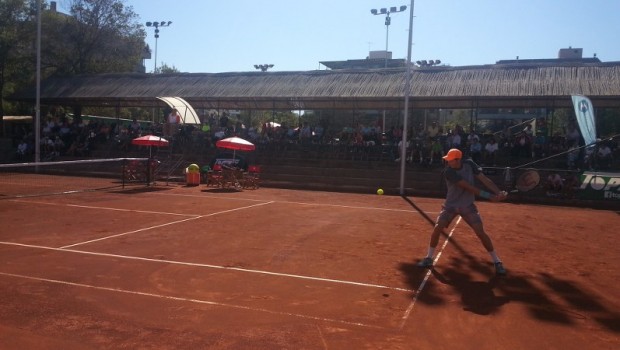 After Gonzalo Lama and Christian Garín starred the previous week, Chilean number one Hans Podlipnik returned from injury with victory in Spain, while Nicolás Jarry won his first professional tournament.

While Garín was unable to follow up his form from Brazil in the USA Futures 13 tournament, Jarry flew the flag for Chile. Having risen to a career high of 613, the young Chilean will receive a boost after his first professional victory, though it doesn’t show on the rankings chart. Like Garín, Jarry reached the top 10 in the ITF junior rankings, and is another great promise for Chile’s tennis future.

The lanky teenager took care of the higher ranked Michale Krueger (USA, 404), rushing to a 6-1 lead in the first set before finishing the match off his third final of the year in a tiebreak.

Podlipnik, who had to withdraw in the semi-final of the Santiago Challenger after taking over the Chilean top spot from Paul Capdeville, returned in Spain with victory at the Futures 8 tournament in Lleida. While most Spanish eyes were on the Madrid ATP tournament, the Chilean returned to action, dropping one set on his way to victory.

Daniela Seguel was unable to complete the Chilean treble. Teaming up with Argentina’s Tatiana Búa once again, the South America pair blasted away the top seeds in the first round, but after charging to the final, could not keep up the pace in France’s Cagnes-Sur-Mur.

The Latinas fell to European pairing Kiki Bertrens (The Netherlands) and Johanna Larsson (Sweden). After taking the first set to a tiebreak, Seguel and Búa couldn’t hold on in the second, losing 7-6 (4), 6-4.

Strong performances in doubles see Seguel now ranked at 145, though her singles ranking has now dropped to 270. Seguel is now the third-highest ranked female in South America, behind Argentina’s Maria Irigoyen (88) and Colombian Mariana Duque (122).