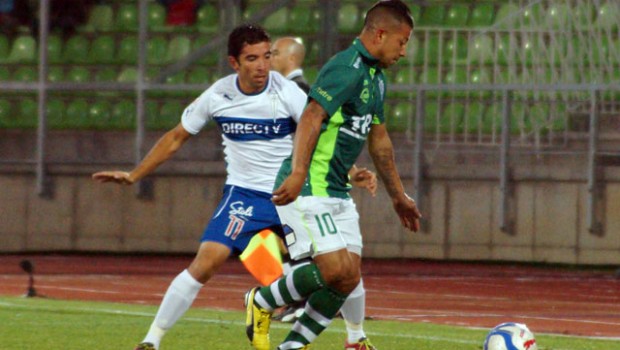 Universidad Católica cut Colo Colo´s lead to four points at the top of the Clausura with a solid 2-0 win at Santiago Wanderers – but were left lamenting a terrible injury to defender Marko Biskupovic.

Valparaíso – In the 22nd minute, Biskupovic suffered a badly broken ankle in a challenge with the Caturros´ Marcos Sebastián Pol, who was sent off by referee Claudio Puga.

While Biskupovic lay in agony on the ground, other players looked on in dismay at the horror injury. Católica skipper Cristián Álvarez hugged Biskupovic in a show of compassion and support.

The severity of the injury means that the Cruzados defender faces a long battle to return to action.

The incident overshadowed Católica´s important victory. After leaders Colo Colo for once dropped points in a 0-0 draw at Cobreloa, it was imperative that the Cruzados won.

Before Biskupovic´s injury, Dario Bottinelli had given the visitors an eighth-minute lead. The revitalised Álvaro Ramos clinched victory with the second ten minutes from time.

Sunday promises to be a big day in the Clausura as table-toppers Colo Colo entertain current champions O’Higgins, who are third.

O’Higgins were left frustrated at the weekend as they failed to capitalise on Colo Colo´s slip-up. Eduardo Berizzo’s men could only draw 0-0 at home against Universidad de Concepción.

Pato Rubio struck twice as Universidad de Chile beat Iquique 3-1 at the CAP de Talcahuano. In an eventful match, Iquique´s Manuel Villalobos missed an 84th-minute penalty that would have made it 2-2. Iquique and La U lie fifth and sixth respectively.

At the other end of the table, Huachipato gave their survival bid a major boost with a vital 1-0 win at home against Cobresal. David Llanos struck in the 77th minute.

Ñublense won 2-1 at home against Audax Italiano, while Rangers sank to the bottom of the accumulated table with a dismal 3-1 home defeat against Antofagasta that left their fans fuming.

In a key game at the bottom of the table tonight, relegation-haunted Everton and Unión La Calera seek three precious points.

*Universidad de Chile are in Copa Libertadores action tonight when they entertain Real Garcilaso at Santa Laura. La U will seek to repeat last week´s 2-1 win in Peru.

If they can achieve the victory, they will be in a strong position in Group 5 with two games left.