Rather than doing a top 10 this year (mainly because I haven’t been paying that much attention to what’s been going on), I have made a “mixtape” – actually just a playlist, but it’s getting there…

It basically reflects what I’ve been listening to and the bands I’ve gone to see. I am planning next year to make a mix each month.
You can download the file here. 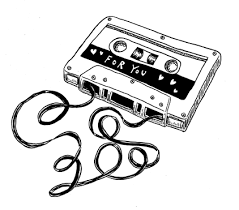 Here is the tracklisting. You probably wouldn’t call this groundbreaking, or featuring “rare tracks”, but a lot of it I haven’t listened to regularly this year.
Hoodlum Shouts- Guns Germs Steel
My friend Luke plays in this band, they are really good- definitely one of the best Australian rock bands to come out in quite some time. This will be on their full length album which comes out next year. When he first told me he’d joined a band that sounded “kinda like Midnight Oil” I was definitely interested. Their sound can definitely be described as “Australian”.
Miles Away- Anywhere
I went and saw Miles Away this year, it was the first time I had seen them in a fair while, the first since they released Endless Roads, a good album to listen to when travelling a long way from home.
Fires of Waco- Change With The Tide
I got to see Fires of Waco twice this year. Once at the same show with Miles Away, and then I saw them on their home turf, at Fat Louie’s in Brisbane in a free show. Their album, Old Ghosts Never Sleep is brilliant.
The Gaslight Anthem- Even Cowgirls Get The Blues
I had a ticket to go and see The Gaslight Anthem but I couldn’t make it. This is probably the first time that this has happened to me, and aside from regretting the waste of money, I also regret not seeing them even more now, as I have listened to them a whole lot this year.
Grinderman- Bellringer Blues
It sounds like Grinderman may have bitten the dust this year, so that’s a band I will never get to see. I love the story in this song.
The National- England
Our friend Sofia reckons that I look a lot like the singer from The National. I’m not so sure on that, but I like this song.
I Exist- Black Unicorn
It is really amazing to see how far these guys have come in just a couple of years. Relentless touring and releasing plenty of music will always help out. I also did an interview in BMA with them.
Kvelertak- Blodtørst
This is a band that got talked up a lot last year. I didn’t really get interested in them until it got announced they were going to play the Soundwave Revolution- which didn’t quite make it anyway. I like their sound, it’s fun.
Break Even- Hells Gates
So far from home- that’s where I’ve spent a lot of this year. Break Even played in Canberra just a couple of days after they put this song out, and almost the whole crowd knew the words. That was pretty impressive.
A Death In The Family- This Letters Proof
From the album Small Town Stories, I started listening to that album a lot more this year, particularly when visiting small towns.
Ringworm- Leviathon
From the split with Mindsnare. Long talked about, but I guess a lot of people didn’t believe it would ever come out.
Frenzal Rhomb- Knuckleheads
Frenzal Rhomb, that staple of Australian punk, they’ve been around for nearly 20 years now. While it’s not quite up there with their earlier works, it’s a fun listen.
Parkway Drive- Carrion
It’s hard to comprehend the popularity of Parkway Drive overseas, without seeing it first hand. Hearing a room full of people chant for CARRION- CARRION was impressive to see. I hope to see them in South America again next year.
Propagandhi- Dear Coach’s Corner
I saw Propagandhi in Hobart and Canberra this year. They were both pretty cool shows.
Audrey Hepburn- Moon River
This one is a bit of a change of pace. This was the entrance song for Francisca at both of our wedding ceremonies.
Machine Head- Who We Are
I was a bit underwhelmed with Machine Head’s latest effort. It was great to see them within the first few days of arriving in Santiago (with Sepultura). How about the encore of Davidian into Halo. Pretty good.

Something different for Sticky monthly column →