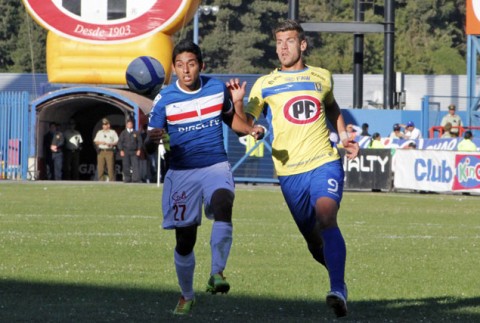 Universidad de Concepción put the only 100 per cent record in the Chilean Primera Division on the line when they take on Palestino in a top-of-the-table clash this evening.

La Cisterna – The match between the top two kicks off the fourth round of matches in the top flight and comes after a ten-day international break.

U de Conce´s chances received a boost in midweek when Palestino lost star striker Roberto Gutiérrez to Mexican side Atlante in midweek.

The árabes have moved swiftly to plug the gap by bringing in strikers Renato ´the Shark´ Ramos, who turns 35 next month, from Lota Schwager and Claudio Latorre, 27, from San Marcos de Arica.

All eyes will also be on Palestino´s new shirt numbers after the ANFP outlawed the number ones in the shape of the old Palestine and fined the club.

There are five matches programmed for tomorrow. Universidad Católica have bolstered their ranks by signing former player Mark González from CSKA Moscow and the left winger could make his debut at Audax Italiano.

Colo Colo seek to continue their fine start to the season when they travel north to play Iquique, while Antofagasta host Cobresal.

The spotlight will be on two managers with contrasting levels of experience in the two matches on Sunday.

Veteran boss Nelson Acosta kicks off his new start at Everton with an attractive home match against champions O´Higgins. The Ruleteros are the only team without a point and have also slipped to the bottom of the accumulated 2013-14 table.

It means the onus is on the former national team boss to get results quickly to move them out of danger.

Meanwhile, Universidad de Chile kick off the post Marco Antonio Figueroa era with a home match against Ñublense. It will be the first game in charge for rookie boss Cristián Romero.

Round four comes to a close on Monday night when Santiago Wanderers entertain Cobreloa in Quillota.