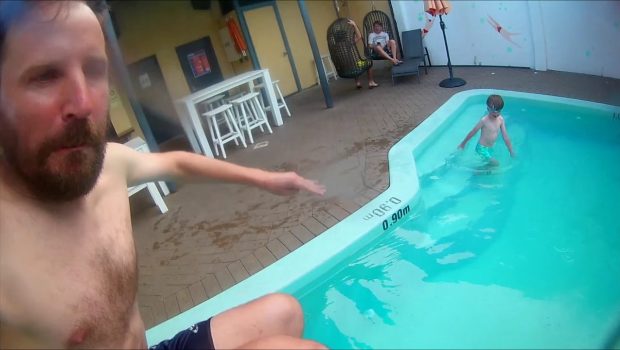 Nico and I took a trip to Perth during the summer school holidays. In the city they had set up some inflatable waterslides on a hot day.

The “City Splash” event was great fun, and in even better news it was free. I’ve had a little GoPro style camera for a while, but I’ve found I haven’t got so much use out of it. Obviously this type of event suits it quite well.

The best thing about this event was that on most of the objects, there were barely any people lining up, so you could have a go and then just go straight back and have another one. We had a lot of fun.

There is a bit of footbag action from Perth City YHA, next to the pool. We also stayed at the Fremantle Prison YHA, which was really excellent. I’ve got another vlog from the trip on my todo list, so maybe a little more about that in the next edition.

We were lucky with our timing on the Perth trip, it was at a time after we had spent a long while avoiding going outside due to bushfire smoke. Things had cleared up a little bit, and thankfully we didn’t come across similar conditions in the West, though there had been fires around. We did a trip down to the south around Albany and you might hear some more about that in the future.

I got to catch up with a couple of long term friends while over there, which was a real highlight.