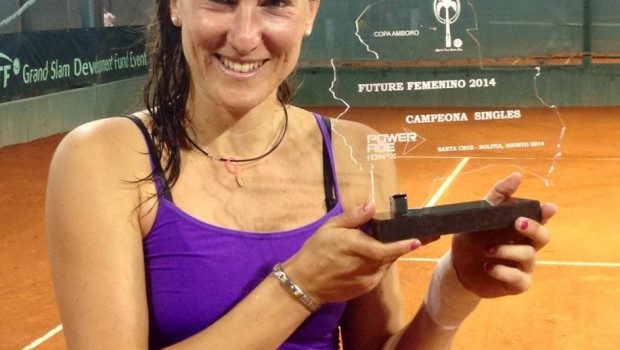 Chile’s Andrea Koch has won her twelfth professional tennis title, proving too strong in the US$10,000 tournament in Bolivia.

The experienced Chilean reached the final without losing a set, and that didn’t change against Argentina’s Julieta Estable. With a significant ranking advantage, Koch (354) was far too powerful for Estable (650), taking the Santa Cruz tournament with a 6-2, 7-5 victory.

The Bolivian victory was the first of the year for Koch, who won three tournaments in 2013. Her immediate future sees more important tournaments ahead in Venezuela and Colombia, both offering a significantly higher prize pool than the $10,000 tournament in Santa Cruz.

Among those vanquished along the way were fellow Chilean player Ivania Martinich (727), who was powerless in a 6-3, 6-0 thrashing.

It was Koch’s first final since Baranquilla in late 2013, where she fell at the last hurdle in both singles and doubles. During her European sojourn, Koch reached three semi-finals but could not pass through to the final.