The Mistake: A Mixup

So my “career” as a sports journalist is taking shape- almost. I am doing an internship at the moment, and I’ve gone to a tennis match (Gonzalez vs Monfils) and sat in the front row, and yesterday attended the presentation by the magazine “El Grafico” of the Botín de Oro (Golden Boot). It was presented to the best player in the Chilean league- which was no surprise, Eduardo Vargas, mainly for his tournament record 11 goals in the Copa Sudamericana.

So I had this plan to do something kind of cool- to make a presentation of a Footbag as a farewell gift (he signed a multi million dollar contract with Napolia in Serie A- the old team of Maradona).

The night before I was thinking of how I could make my presentation. Our niece Magdalena was staying here with us and I asked her if she could draw a picture of a soccer player. Despite her claims that she drew like a kid- (she obviously hasn’t seen any of my “works of art”)- she drew an awesome picture.

I filled in the rest of the card with a little message and things were looking good. So we got into this ceremony, and I really had no idea what to expect- but it was pretty packed. The Primera Division is a pretty big deal in Chile. There were media from all different places in there, and they had lots of food and drinks for everyone.

So a player comes in, and the media scrum forms. I had never seen a media scrum up close and personal, but they are all pretty intense about getting the best sound clip, photo or video. So I look at the guy, he’s got his hair in the spiky kind of haircut that is very common for players to have- and he’s got a couple of tattoos on his arm.
Lots of kids were getting his autograph, so I thought- this is my man.
I went up and made my little presentation, and we took a photo. 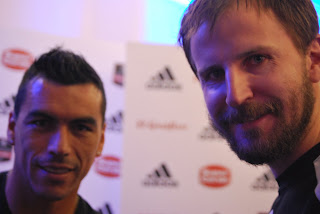 There was just one problem that I realised not too much later. That was Estaban Paredes, striker for Colo Colo- mortal enemies of “La U”. It’s like making a presentation for a Manly player to a Norths player- except Colo Colo don’t play in the Primera B. 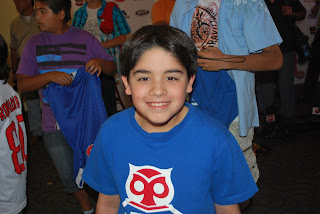 The young, and not so young were readily awaiting the arrival of Eduardo Vargas. People had begun arriving at 12, and Vargas arrived at about 2pm, just before the ceremony started. Unlike the other players that arrived, he didn’t make any time to sign autographs, he was rushed in to get a press shot with plenty of sponsorship banners in the background. Interestingly enough, a lot of the media had gone inside the Teatro to get a good position there- they must have known there wouldn’t be much to get from his rushed entrance. 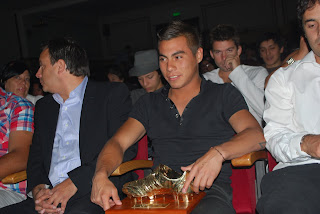 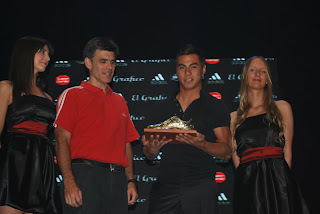 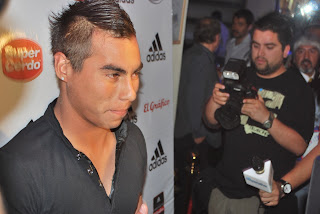 The presentations begun, Vargas got the “Golden Boot” for his efforts- funnily enough, he got a red card in the previous match where they lost 2-1 against Universidad Católica, and won’t take any part in the finals campaign, so he has played his last game in blue.

Just like his rushed entrance, Vargas had to leave almost immediately after collecting his prize. They then announced the “team of the year”- which was dominated by Universidad de Chile players. After all they won the Apertura already, and the Copa Sudamericana- doing that without registering a loss, then they are into the final of the Clausura tournament. This week’s loss was the first time they lost during that tournament. I’m not exactly sure of their streak- I have seen different reports between 34-36. Unbeaten you have to say, as there were a number of draws.

Their opponents, Cobreloa did not have any players to show for their efforts, whilst Paredes was the only player selected from Colo Colo.
We left the ceremony a bit early, as we still had more things to do, and they had a whole lot of sweets lined up. I took a chocolate from a jar and was reprimanded by a lady, although I didn’t have a clue what she was saying. They were preparing a fountain of chocolate, so Francisca wanted to stay, but I wanted to escape the wrath of the lady, so we left on the promise that I would buy an helado.
I mentioned the word “career” in inverted commas as I am currently doing an unpaid internship. Hopefully it will lead onto something more, because being a sports writer is definitely one of my dream jobs.