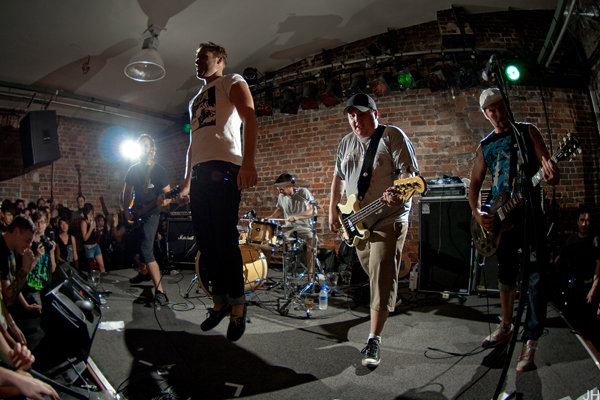 When I went up to Brisbane recently I did a whole bunch of interviews. I got to see Polar Bear Club twice, and after the PBC show, a bunch of people went over to catch Jungle Fever’s set at some terrible Destroy All Lines club.

I saw about four seconds of JF, and did an interview with Joel (bass) after the show. The whole trip was quite an adventure, I flew back to Canberra at 5am and spewed soon after arrival. What a start to a day.

The picture at the top I blatantly stole from JHat without any permission. It’s from the show JF played in Sydney the next day. He takes really good photos and then writes about them. You can read an interview with him that I did in one of last year’s zines. It’s in this blog somewhere.

Jungle Fever are a band I saw a lot over a lot of years. I think the first time I saw them was at the old Civic Youth Centre, just before it got knocked down. I have a feeling this was Hard Luck’s first ever show.

From then on I saw them sporadically, generally every 6 months or so. I never knew much of their stuff, and didn’t really care about them, but as time went on, and it got towards when they breaking up, I was starting to realise I knew heaps of the songs, and they were actually one of the most fun bands in Australia to watch.

A couple of favourite shows- when they played Bar Broadway with 4 Dead, the night before Every Time I Die’s first tour. There were heaps of Canberra kids out that night, it was a bit of a rager. When I lived in Melbourne I saw them play at some sort of community centre. It was the first show I’d been to in ages, and I was hanging out with some people, it was the first time I’d really talked at length to someone I met at a show. Those guys are now in Rort, who seem to be doing well for themselves. The show had a great variety in the lineup, it was cheap as and I had a great time. There were even a couple of bands from NZ playing, I think it cost $6 or something. It was not the sort of place you really expect a hardcore show, I think the next day’s activity was going to be playgroup or something. 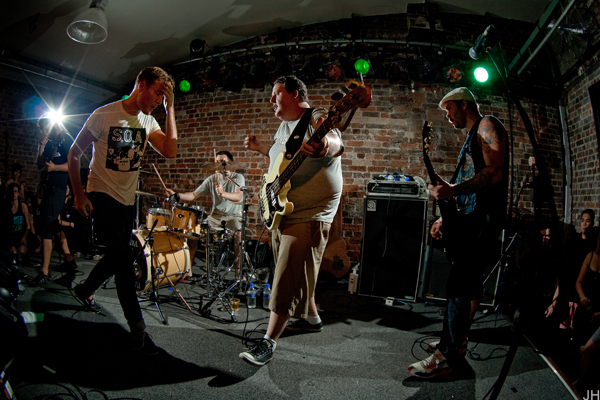 So Jungle Fever- You played your proclaimed last show like, a year ago?

What brings you back?

For the hell of it. Just for the hell of it. We got asked to play with Mindsnare in Melbourne. Why wouldn’t play with Mindsnare, at the Arthouse? You can’t argue with that. We did that, and we thought, let’s go to Brisbane, we haven’t been there in a long time. Fuck, I was in the band for two years, and the only time we came to Brisbane in those two years was when we toured with Sick of It All and Comeback Kid. They hadn’t been to Brisbane for ages before that either. So we thought we’d come up here and then we’re going to Sydney tomorrow.

Do you guys still all live in Sydney, or everyone lived in Sydney for a while or something?

Everyone lived in Adelaide. One by one they moved to Sydney, apart from their bass player. When they wanted to go a bit further, they got me to join the band. I was in the band for two years. Then one by one everybody moved back to Adelaide. Eventually it was too hard to keep it going.

How did you get involved in Jungle Fever in the first place?

I used to play in another band called Taking Sides. I played guitar in that, but I normally play bass. I was always keeping in touch with everyone from the band, then one night Gabe hit me up and asked me if I wanted to play in the band. One week later we recorded a song for one of the Hardcore compilations, maybe it was 06, I don’t really know.

The Arthouse with Mindsnare in December was the fucking best night ever. We played a show a few years back at Sike Your Mind or some shit, in some club. We played Bro Hymn, punx went crazy. It was awesome.

Will Jungle Fever break up for good after these shows?

I sent a message out to the guys, asking if there are any more shows booked, just out of curiosity. They said no, but with this band never say never. Tomorrow will definitely by the last show for a long time. Half the band lives in Sydney, half in Adelaide. Half the guys play in Sex Wizard, they’ve got their own thing going on.

What are you going to do now?

I play in a covers band. A mid 90s punk rock cover band. We’re called Old Music For Old People. We mainly play music from CDs which have a “Don’t pay more thant $10 for this CD” by Fat Wreck. Sometimes we play some from the under $20 section as well. Wherever we go we get a whole bunch of friends to get up and sing.

You guys are playing in Sydney soon- what are you expecting from that?

What’s your beer of choice?

I like James Squires- Golden Ale. Fat Yak’s pretty good too. I don’t know if that’s the real name. I think it’s called something else. Fat Yak will do for now.

What bands were you in prior to Jungle Fever?

I was in Taking Sides. We had that early 2000s kinda Bridge 9 sound- Carry On, Hope Con, that sort of thing. Before that I played in a little punk rock band. It sounded like Propaghandi, just fast stuff.

Never played in any sketchy nu-metal bands in your youth?

No way! Never, ever did I tune my guitar to Drop D, never, never, ever played sketchy metal. Never!

We’re in Brisbane now. What three places would you recommend to a tourist?

Kim’s (?) guitars, the best guitar shop in the country. New York Slice, they do a good pizza. There was a place we bad dinner, some Thai vegetarian place, I dunno what it’s called, I’d send them there. Brisbane and I don’t really see eye to eye.

Have you been in a fight with anyone in Brisbane?

I’ve never been in a fight in my life. I can’t be bothered.

Do you think Jungle Fever will ever become a regular touring band again?

No way. Everyone in the band owns a house. It’s very hard to be a regular touring band with a mortgage.

Maybe a once a year thing?

With this band never say never. It’s not a priority though. Playing shows is not on the radar at all.

What’s everyone else in the band doing?

Right now, they’re probably drinking in the bar outside. Gabe’s probably dancing to bad electro, he’s pretty keen on that. Musically Tom, Jiggzy and Gabe are doing Sex Wizard, they’re pretty cool. No one really cares about them now, but in a few years people will buy their stuff at overinflated Ebay prices and say how great they were.

What are you going to do in the next year or so?

Musically, just keep doing Old Music For Old People- as a joke, as a laugh. I’ve always loved punk as well as hardcore. When I wake up I listen to Good Riddance, when I go to bed I listen to NOFX.

At this point the recording cut out. There wasn’t too much left to the conversation. Thanks a lot to Joel for the interview.

One Response to JUNGLE FEVER