Asmus Helms has been a key part of making the Danish Footbag Open happen. He has been part of the Danish scene for a long time and lets us know the latest.

– How long have you been playing footbag and what got you started?

It’s early summer 2004. I am sitting in my room in my parents basement in a small town in the south of Denmark. A message pops up on MSN Messenger. It is from a boy in Copenhagen, I have never met him but we have messaged back and forth on a danish youth site. He sends me a link to a video, he tells me that what they do in the video is called footbag and that the European Championships are coming to Denmark.

The video is the video Kampa Park, filmed in the legendary Kampa Park in Prague in 2003 and edited by Mads Hole and Mads Neuhard. I watch the video in awe and when Vasek does Neutron Smasher > Toe Barrage > Toe Symp Whirl > Rev Swirl > Pincher I knew I had to start playing. I got my first footbag a couple of months after that.

– The Danish Footbag Open is coming up soon. You have been a key part of making a big event happen. Tell us what the event means to you.

I don’t want to sound too sentimental but this event has a pretty big symbolic meaning to me. In 2003 there was the first Danish Footbag Championship (There was an Open Division as well – Ryan won) in recent times and there have been determined a Danish Champion every year since then. The tournament was organized by Mads and Mads and I feel like, after a long process, the torch is being passed on now. In many ways this tournament is a tribute to them.

– What’s happening in Denmark at the moment in terms of footbag?

As far as I know and see it there is 3 important things happening in Denmark at the moment, the first one is obviously DFO. The second one is that for the first time in many years we have two new eager players in Copenhagen that might actually stick around. Shout out to them. And the third thing is that we finally have a player capable of competing at an international level. Big props to Mathias Blau for dominating the German Championships.

– How is the connection with the rest of Europe? You have a wide range of players coming for the DFO.

I think we have a great connection with the rest of Europe and this is due to a bunch of things:

– You are not originally from Copenhagen. What has changed for you and your footbag game since moving to the capital?

I moved to Copenhagen right out of high school. I didn’t have a place to live I just knew I was starting on a degree in multimedia design and that I wanted to party and play footbag. Alcohol and girls quickly won my attention over playing. But I didn’t lose touch with the players I knew over here and they quickly became a family away from home. That’s what made me come back from time to time and what made me start playing regularly again.

– What about your personal game. What are you working on at the moment?

I’ve started working on the Reverse Reverse Whirl (the trick that some people just call Whirl) and I can see it helps a lot on my footwork on other tricks. Also I wanna hit Pixie Blurriest soon.

– You recently wrote a piece about footbag clubs and getting paid. What is the most important part of this?
Getting organized. Take yourself serious and other people will too. You can read the full article here.

– You have some great sponsors for the DFO. What was the key to getting them onboard?

Basicly the same answer as above. We took the tournament serious, so we contacted serious sponsors with serious proposals. Also it helps to use your network.

– How do you see footbag at the moment, around the world? What is needed?

I like footbag as the small dysfunctional family/community it is. Instead of focusing on becoming bigger I think we should focus on becoming the best we can be. This is gonna sound super cheesy but how can the outside world love us if we don’t love ourselves? We don’t have to be breakdancing, juggling or freestyle football – footbag is great and we need to focus on that. Let’s focus on becoming the best we can be instead of trying to win some imaginary “Next Big Street Sport Fad of the Year” award.

– Who is your biggest inspiration in footbag?

Good question! When I started out it was definitely Jorden Moir and it probably still is today. And even though we don’t agree on much in life I am happy to say that he is a good friend of mine today. I like passionate people with opinions.

– Your writing about footbag is regularly accompanied by some great drawings. What are your biggest influences for that?

Thank you. That is a whole other thing I don’t want to get into but here is a footbag related drawing. 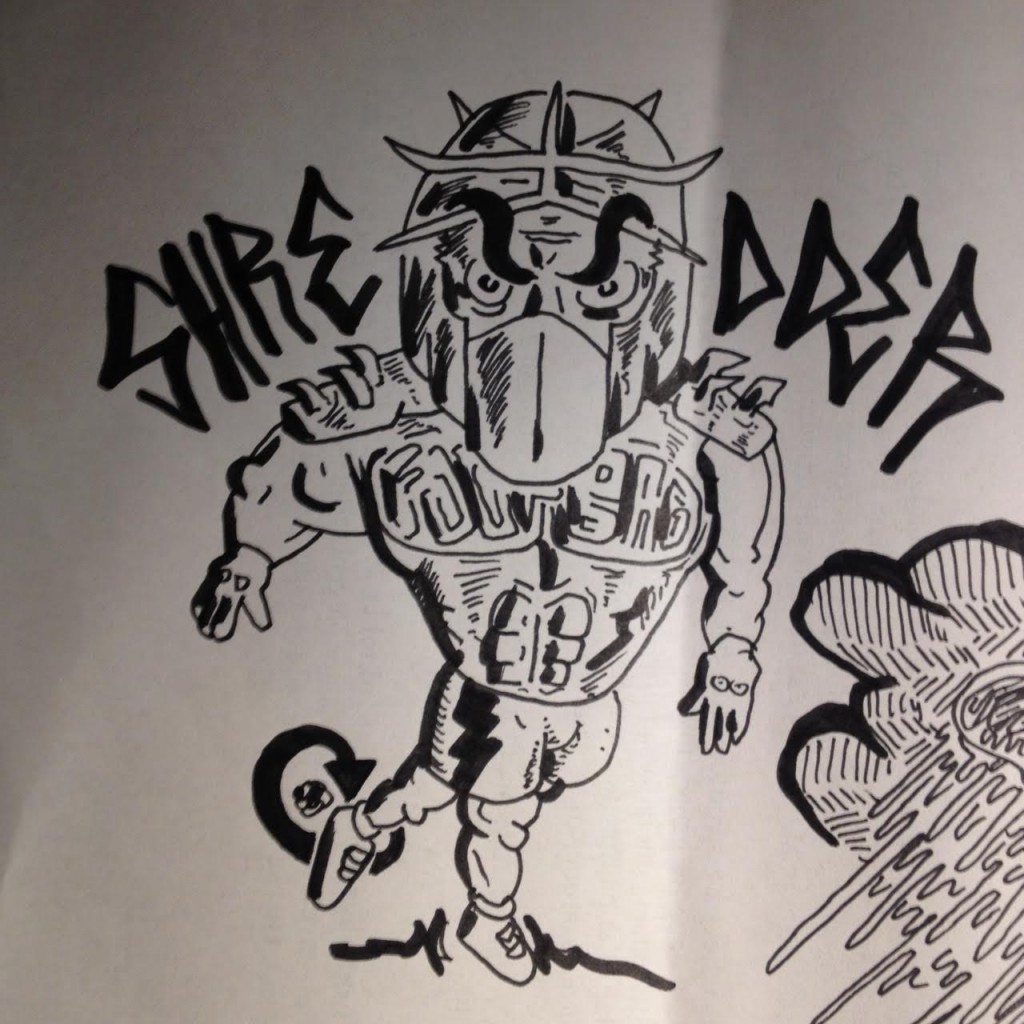 – Anything more to add or anyone to thank?

Most importantly a big shout out to the rest of the crew helping out with DFO. They have all worked their asses off and I can’t wait to see all of our hard work paying off in the coming days. Thanks to our sponsors and Partners (Kulturhuset Indre By, Playground and SON Factory). And finally a shout out to all the great friends I’ve made all over the world because of our love for this crazy little sport.