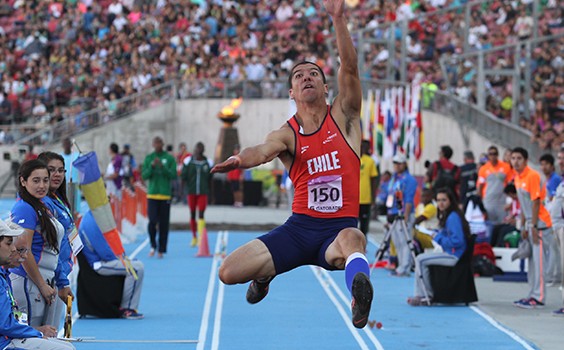 Chile long jump record holder Daniel Pineda has promised to come back stronger after receiving a doping ban until next March.
The long-running saga started when Pineda missed a drugs test in Colombia in June 2012, but it wasn’t until last month that his punishment was confirmed.
In a statement he published on social networks, Pineda said: “It’s related to a supposed case of doping, for not having stayed to realise a test in Colombia. This is absolutely certain, I didn’t do the control, but for reasons that for me seemed correct due to the bad procedure of part of the organisation.
“Lamentably, for the international institutions, this case is an error in the norms of the World Anti-Doping Code and I’ve been sanctioned until March 4 next year.”
The 28-year-old didn’t want to go into greater detail about his reasons for not doing the test. However, he did say that his life had been turned upside down in the aftermath.
He said: “There have been many months of torture and questioning myself about the future, taking into account this uncertainty which goes killing the soul day to day.
“I assume my error with bravery and with the knowledge that I can go forward despite complex situations, and situations of much bitterness, that you come up against in the path.”
The Panamerican Games gold medallist and Chilean record holder is looking forward to competing again once his ban ends.
He added: “Friends, this isn’t for always. We will return to see each other next year. I’m looking forward to a new cycle in which I can achieve my dreams, happiness and share them with you.”