The Australian Footbag Championships return to Sydney this weekend. Players will arrive tomorrow night, with the first event starting on Friday, Footbag Golf. The Golf course takes the players on a historic tour of The Rocks with picturesque views over the harbour. The official accomodation for this is the nearby Sydney Harbour YHA, which has kindly provided a discounted rate for the tournament.

Favourite for the tournament this year is Hobart’s Jeremy O’Wheel, who won the Request Contest last year. This event involves hitting a specific two trick combo on request. The event came down to an exciting climax, with Jeremy just beating New Zealander Phil Morrison.

Lucky for some, Phil will not be returning to Australia this year. He showed his class last year, completely dominating all of the other events, with a flawless routine on the final day. Some of the other contenders this year will be Daniel Boyle, ranked 29th in the World in the Shred 30 event and Caroline Birch, Australian women’s champion. Players are appearing from all over Australia to compete in the annual event, which has been running since 2001.

Saturday’s events will be held at the Royal Easter Show. The players competed here last year, but 2010 will see Footbag move up to a bigger and better arena, with capacity for 1500 spectators.

Sunday the players will head to the rooftop of their accommodation, Sydney Harbour YHA. The backdrop for the routines and circle events will be the Opera House and Harbour Bridge.

For more information on Footbag check out www.footbag.org or www.ausfootbag.org 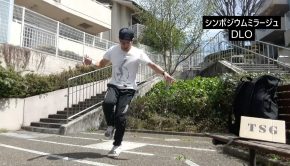 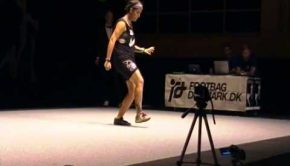