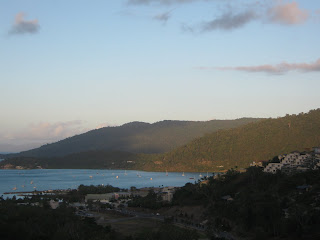 Sometimes it gives you a feeling of prestige, but sometimes there’s no escape, for example, 5 am this morning.

With bleary eyes I eventually made my way to the door.

What the girl meant was she had locked herself out, could I come open the door. That’s not really the sort of thing you want to hear that early in the morning. Conveniently it was just the room next door, so things weren’t too difficult.

After a short attempt at getting back to sleep I decided my attempts would not be worthwhile. I thought it might be the only chance to see the sun rising from the sea on this trip. After walking past some very, very late night revellers and some early starting triathletes, I realised today was not the day for that either and headed inland, navigating my way through the backstreets of Airlie (all three of them) toward the top of the hill. The Great Whitsunday Walk is 28km of trek, taking you to Cedar Creek Falls. I didn’t want to do that, but my track, to Honeysuckle Lookout would take me through the last section of that track. The track is barely signposted, which after walking parts of it, I think is so that every backpacker and his dog would try and make the Great Walk after a pint or two too many.

There is actually no mention of the Great Walk up until the turnoff to Honeysuckle Lookout, where it informs you to travel further you need to have a permit. I was surprised by the almost complete lack of signage about the walk, even compared to Mt Rooper which I visited a few weeks ago.

The walk basically switches from time to time between open woodland into rainforest, very similar to where we walked in Paluma, which is between Townsville and Ingham, a little while inland. Here is a photo from Paluma, I didn’t take any photos today. 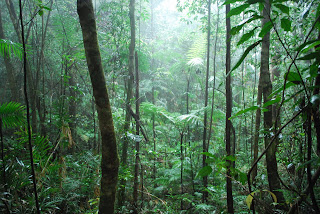 I’m glad I wasn’t walking all the way up their to get some sort of panormaic Whitsunday spread, as the view from the lookout was completely shrouded in fog. I could only just slightly make out Abel Point marina, if I looked hard. A sign midway along the track told me I would have a splendid view of the islands, but apparently not today.

I saw two cane toads today. One was right in the middle of path, like a sentry blocking the way. It looked like a rock and I didn’t even realise until I was right near it. Cane toads are a terrible pest in the north of Queensland, this was actually the first time I’ve seen one up close. Soon after one jumped right over my foot. Unfortunately I don’t have any cool stories about doing a double-round-the-world with it, then giving it a big boot into the boosh, I simply continued along my way, and hoped I wouldn’t see anymore.

Early on I encountered a brush turkey. These animals are around a fair bit in the area, they also look incredibly stupid. I began my day at a running pace, I didn’t think the lookout was quite so far, I’d just seen a vague map, and thought it would be a nice run. After a while, the path was getting too slippery and I knew I still had a long way to go, so I slowed to a walk. Before this, I came through a bit of a curvy section, where I first met the turkey. At first it was like he was trying to run out of my way, but then it would stop, then I would almost catch up, it would take off again, almost like it was leading me along some kind of path. I started thinking it was really strange before the turkey veered off down the hill.

On coming back from the walk I had a quick footbag session. Training under fatigue is something that people do to train in a lot of sports, and I was fairly fatigued. Too fatigued it seemed, I had a few runs, with some fun tricks, then just tried to hit a fun sick 3 link-> phoenix>blur>paradon. I hit it on my second try.

On arriving back at the hostel, I went straight into the pool. I achieved another goal I have been reaching for in recent times, swimming 3 laps of the pool underwater. The pool would be less than ten metres long, but it’s just a little something I’ve been aiming for, and now I’ve done it so I’m pleased with myself.

The photo at the top is from my first couple of days in Airlie Beach, the view from along the track in the woodland sections is quite similar to that, in parts looking further down the coast, then in the other direction at Abel Point and Canonvale. The day I took this photo I got a bit lost looking for the track, I was well off the mark in my search location, but in the early hours of this morning I was right in the money.

Just a few days left before I begin an actual holiday, tomorrow I have the day off work, I’m heading out on a kayak tour, should be awesome. I’ve been able to do some pretty incredible stuff up here. 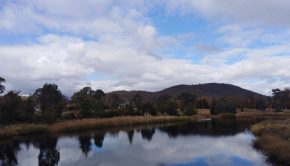