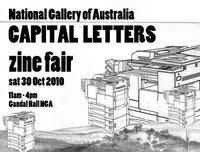 Sorry, but the image is really small, I haven’t really seen any other pictures about the zine fair.

As a part of the Space Invaders street art exhibition, they are having a zine fair at the NGA. That’s right, zine at the NATIONAL gallery. Kewl.
I’m going to be having a stall with my zine Capital Eyes. I am midway through preparations for my 10th issue, so hopefully I will get that done in time. I was going to say it’s going to be a bit more personal, but it isn’t really. A couple of the things in it will be reprints, but basically it’s going to be a look at the recent trip I did to Sydney and Melbourne to see Alexisonfire and Break Even, and a bit of a reflection of the times I lived in those places and what I think about those bands.
Funnily enough, Capital Letters was an idea of a name I had for a zine when I was tossing around ideas in my mind. I wanted it to be Capital something, as it was a Canberra based zine, and Canberra is the capital. Another one that struck me was Capital Waste, the name of a garbage disposal company, but I thought people would think it would just be a waste.
I went with Francisca to check out the new galleries at the NGA yesterday. Definitely worth a look. I’m not really an expert on art, so I won’t give it a review. 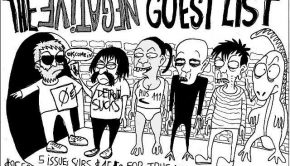