Quinta Normal and the Santiago Navy 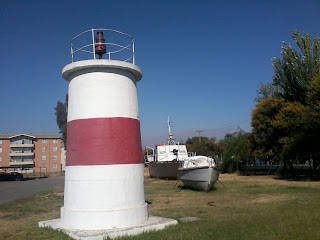 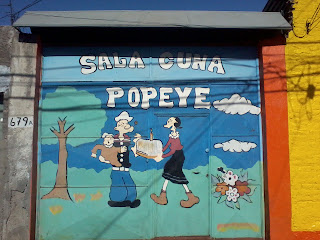 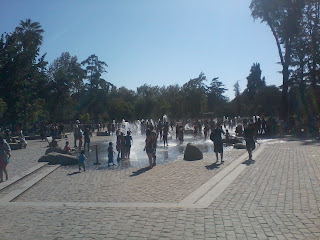 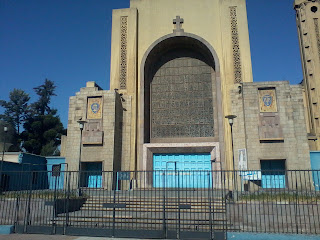 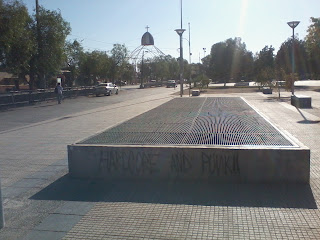 Got up to some more adventures today with Bron. We’re going to get up early and go for a day trip down to the coast, so I won’t write too much about it, but I added a few pictures.

This was our basic day:
Bron slept until late and I wrote a couple of articles.
We ate lunch at a place selling empanadas. It was Bron’s first experience with them. The ones wer had were ok, but I have definitely had better.
Considering each one cost about 600 pesos ($1.20), it wasn’t really a big deal.
After lunch we just went to the park across from Bellas Artes and sat down in the grass and drank a couple of beers. It was good to just while away the afternoon in the shade. Our original plan had been to head to Parque Quinta Normal. The park itself has just been redone and there are also a whole lot of museums within the park.
A whole lot of people were making use of the water fountains that have just been redone. Apparently they light up at night too. One of the really noticable things here in Santiago is the waste of water – particularly considering there is a drought at the moment.
So many people (particularly those who are most likely employed by the municipality) spend hours watering, well they probably water more dirt and concrete than the actual grass. We didn’t go into any of the museums, I think we were just content to wander around the park itself. Inside the park there is the National Museum, Natural History Museum, Science and Technology Museum and a few more.
Our wandering took us to the church – Gruta de Lourdes. It seems the church is not used anymore, there is barbed wire all around it and nobody was going in, it also seemed an outdoor altar had been set up directly across the road.
We wandered on from there, came into a kind of industrial area, then made our way back to what we expected to be the park, however it was part of a Navy base. I’m not sure if the guy on either gate should have checked us out, we could have been spies or something, but we had a wander through there.
Considering Bron spent much of her childhood as a Navy Brat, maybe she had the look, so they let us pass without worry. Who knows really, the bigger question is what is the point of a naval force hundreds of metres above sea level.
That I don’t know. Once outside the navy area, we walked back into the park, and had no troubles getting back to the metro stop. Of course though, we entered on the wrong side, so we just took a bit of a detour to some of the outer suburbs of Santiago. We got off at Lo Prado and had a walk around there. We came across a nice park which had some slippery dips as well as a skatepark. From there we walked to San Pablo, where we could take the metro all the way back home.
We cooked up some burritos for dinner, which always goes down well. Tomorrow the plan is to head down to Valpo, though we have spent a lot of time in the Region V lately, so the next time maybe we will go somewhere else.
It’s definitely worth a visit for a first time visitor though, and of course, it’s a part of Australian history. I think I’m going to try and write something based on old mate Watson for my next uni project, the next subject I do will kick off at the end of the month.